Poland made it to the quarter-finals of the Euro 2016, their best performance yet. 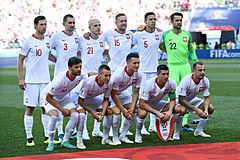 The Polish team before their match against Japan in the 2018 World Cup.

Poland failed to make it out of the group stage in the 2018 World Cup.

All content from Kiddle encyclopedia articles (including the article images and facts) can be freely used under Attribution-ShareAlike license, unless stated otherwise. Cite this article:
Poland national football team Facts for Kids. Kiddle Encyclopedia.