Flag of Poland facts for kids

The flag of Poland (Polish: flaga Polski) consists of two horizontal stripes of equal width, the upper one white and the lower one red. The two colours are defined in the Polish constitution as the national colours. A variant of the flag with the national coat of arms in the middle of the white fess is legally reserved for official use abroad and at sea. A similar flag with the addition of a swallow-tail is used as the naval ensign of Poland.

White and red were officially adopted as national colours in 1831, although these were associated with Poland since the Middle Ages and were emphasized on royal banners. They are of heraldic origin and derive from the tinctures (colours) of the coats of arms of the two constituent nations of the Polish–Lithuanian Commonwealth, i.e. the White Eagle of Poland and the Pursuer of the Grand Duchy of Lithuania, a white knight riding a white horse, both on a red shield. Prior to that, Polish soldiers wore cockades of various color combinations. The national flag was officially adopted in 1919. Since 2004, Polish Flag Day is celebrated on 2 May.

The flag is flown continuously on the buildings of the highest national authorities, such as the parliament and the presidential palace. Other institutions and many Polish people fly the national flag on national holidays and other special occasions of national significance. Current Polish law does not restrict the use of the national flag without the coat of arms as long as the flag is not disrespected.

Horizontal bicolours of white and red being a relatively widespread design, there are several flags that are similar but unrelated to the Polish one. There are two national flags with the red stripe above the white one: those of Indonesia and Monaco. In Poland, many flags based on the national design also feature the national colours.

Right and obligation to fly the flag

According to the Coat of Arms Act, everyone can use the Polish flag, especially during national and cultural events, as long as it is done in a respectful manner. This liberty in the use of national colors is a relative novelty. Until 2004, Polish citizens were only allowed to fly the Polish flag on national holidays. The use of both variants was restricted, but only flying the flag with coat of arms was, from 1955 to 1985, punishable by a fine or arrest for up to one year. After 1985, unauthorized use of any national symbol was an infraction. A possible explanation to such harsh measures was the fact that the officially promoted holiday of 1 May was separated by only one day from the pre-war (and current) national holiday of Poland, the anniversary of signing of the Constitution of 3 May 1791. While hoisting a flag on 1 May was acceptable, no later than the following day it must have been hidden. 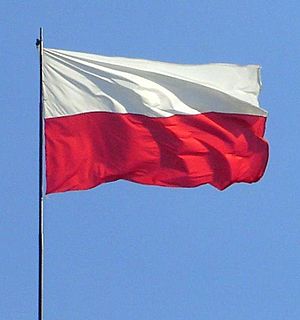 Flag without the coat of arms

That restriction and kind of state monopoly on the use of national symbols during the Communist regime made flying the Polish flag a symbol of resistance against the government. It became customary, as it still is, for workers to hoist Polish flags on plant buildings when going on strike. That is why the Polish flag, as a symbol of patriotism and resistance against the Communist rule, is part of the Solidarity trade union logo.

Flag without coat of arms

The following organs are required by law to fly the national flag without coat of arms either on top or in front of their official buildings:

Additionally, the national flag without coat of arms is used as an ensign for inland navigation.

Flag with coat of arms 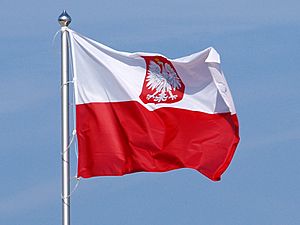 Flag with the coat of arms

While the ban on using the flag without coat of arms has been lifted, the use of the national flag with coat of arms is still legally restricted and should be flown only:

In practice, however, the restriction is often ignored and the two flags, with and without the coat of arms, are treated as interchangeable. The variant with the coat of arms is particularly often used by the Polonia, or Polish diaspora outside Poland, especially in the United States. 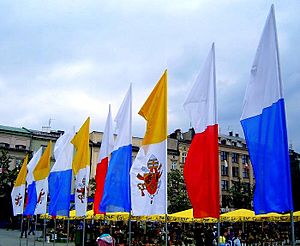 Polish (white and red), papal (yellow and white) and municipal (white and blue) flags in Kraków's Grand Square during Pope Benedict XVI's visit to Poland on 27 May 2006

State and local government organs are legally required, and other institutions and organizations as well as all citizens are encouraged to fly the Polish flag on the following days:

Polish Flag Day (formally: Flag of the Republic of Poland Day, Dzień Flagi Rzeczypospolitej Polskiej) was first observed on 2 May 2004. It was established in order to educate the Polish people about the history and significance of national symbols. The date was chosen to coincide with the Polonia Day traditionally observed by the Polish diaspora outside Poland and the Polish Senate on 2 May. There was also a historical reason: under the Communist regime, 2 May was a day when national flags, hoisted for Labor Day on 1 May were being quickly removed before Polish Constitution Day (3 May), which was banned by the authorities. Since the re-introduction of the Constitution Day in 1990 and establishment of the Polish Flag Day, the flag is flown continuously during the first three days of May. Unlike May Day and Constitution Day, the Flag Day is not a public holiday, although making a bridge, i.e. taking a day off on that day is common practice (see Holidays in Poland).

Other days when the Polish flag is often flown on official buildings include:

The flag is also popularly flown during important sporting events, such as the FIFA World Cup, if Polish athletes are participating; and during an official visit of a particularly important person, especially a pope, in Poland. During a pope's visit, the national flag is usually flown together with yellow and white Church flags, and white and blue Marian flags. It is uncommon to fly the national flag on personal occasions, such as birthdays or weddings.

According to polls, about one out of three Poles say they own a Polish flag, and about one out of four fly it on national holidays. Such public display of patriotism is much more common in western Poland, especially in Greater Poland, than in other parts of the country. 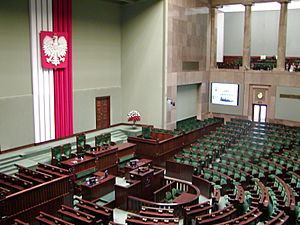 Flags in Poland are used according to a customary, rather than legal, flag protocol. Apart from the obligation to treat the flag with due respect, Polish law does not offer a detailed code of correct usage of the Polish flag. Some organizations and public institutions, such as the Heraldic and Vexillological Institute and the Supreme Chamber of Control have proposed written flag protocols for the Polish flag, based on custom, flag protocols of other countries such as India and the United States, and common sense. These guidelines, however, are not legally binding.

Traditionally, the national flag is reserved to serve either informative of festive purposes. A single specimen of the flag on or in front of a public office building indicates its official role. Multiple flags, on the other hand, are normally used to decorate both public and private buildings to mark special occasions, such as national holidays.

The flag should be raised before 8 a.m. and lowered at sunset, and if flown at night, it should be illuminated. During a ceremonial raising of the flag, the national anthem is played so that the timing of the raising matches the duration of the anthem. Civilians pay respect by standing in a dignified manner; additionally, men uncover their heads. Members of uniformed services stand at attention; if their uniform includes headgear and they are not standing in an organized group, they also perform the two-finger salute. Color guards dip their banners to the flag. (See video) 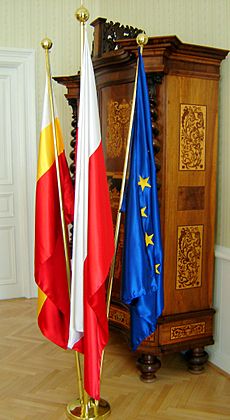 Example of indoor display of the flag of Poland (center) together with other flags: that of the Lesser Poland Voivodeship (left) and the European flag (right)

According to generally accepted standards of respect, the national flag should never be dipped to any person or thing. Care should be taken to prevent the flag from touching the ground, floor or water beneath it. It should be also secured from being torn off or falling to the ground and it should not be flown outdoors during a heavy rain, blizzard or very strong wind. The flag should never be flown dirty, torn or faded. When no longer in a fit condition to be used, it should be disposed of in a dignified manner, preferably by cutting it in half so as to separate the colors and then, burning.

When displayed with other flags, the Polish flag should be raised first and lowered last. Each flag must be flown from a separate pole of the same height, but the flag of Poland should be always placed in the most honorable position. It means that if the total number of flags is even, the Polish flag should be placed to its right of the other flags. If the total number of flags is odd, it should be placed in the middle. Alternatively, two Polish flags may be placed, one at each end of the row of flags. The order of precedence for flags is as follows:

The President of the Republic may announce a period of national mourning. During that time Polish flags are flown at half-staff. If a flag is flown from a wooden pole rather than a staff or mast, a black ribbon is attached to the pole as a sign of mourning or a black flag is flown to its left from the national flag.

All content from Kiddle encyclopedia articles (including the article images and facts) can be freely used under Attribution-ShareAlike license, unless stated otherwise. Cite this article:
Flag of Poland Facts for Kids. Kiddle Encyclopedia.