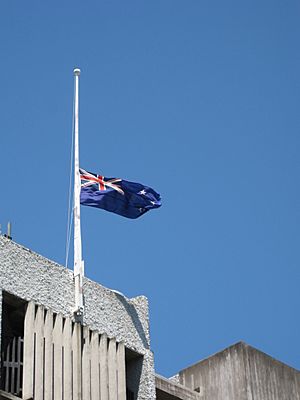 A flag of New Zealand at half-staff

Half-staff or half-mast describes a flag being displayed at halfway up a flagpole or a ship's mast. This is done in many countries as a symbol of respect, mourning, or distress, or a form of honor.

The flag does not always have to be flown at exactly the half-way point, sometimes it is acceptable to have the "half-mast" flag at slightly lower or slightly higher than the middle of the flagpole or mast. Originally, "half-staff" meant that the flag had to be flown one flag-width from the top to allow for the "invisible flag of mourning" to be at the top.

All content from Kiddle encyclopedia articles (including the article images and facts) can be freely used under Attribution-ShareAlike license, unless stated otherwise. Cite this article:
Half-staff Facts for Kids. Kiddle Encyclopedia.