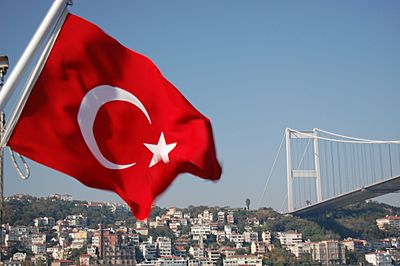 Flag of Turkey over the Bosphorus

A flag is a piece of coloured cloth with a special design that is put on a pole as a symbol.

Flags first appeared more than 2000 years ago in China, and in Europe under the Roman Empire.

There are many types of flags:

All content from Kiddle encyclopedia articles (including the article images and facts) can be freely used under Attribution-ShareAlike license, unless stated otherwise. Cite this article:
Flag Facts for Kids. Kiddle Encyclopedia.