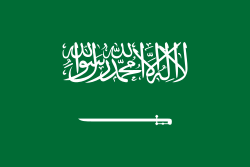 The flag of Saudi Arabia is the flag used by the government of Saudi Arabia since March 15, 1973. It is a green flag featuring in white an Arabic inscription and a sword.

The script on the flag is written in the Thuluth script. It is the shahadah or Islamic declaration of faith:

The sword, symbolizes the importance of the inscription by underlining it.

Green flags with this or other Arabic scripts are commonly seen in Islam. They should not be confused with the Saudi national flag. These other flags normally do not have the sword symbol.

The flag is made so that the shahada reads correctly, from right to left, from either side. The sword points from hoist to fly on both sides. The flag is sinister hoisted. This means that the obverse side (front) has the hoist side (flagpole side) to the right.

All content from Kiddle encyclopedia articles (including the article images and facts) can be freely used under Attribution-ShareAlike license, unless stated otherwise. Cite this article:
Flag of Saudi Arabia Facts for Kids. Kiddle Encyclopedia.