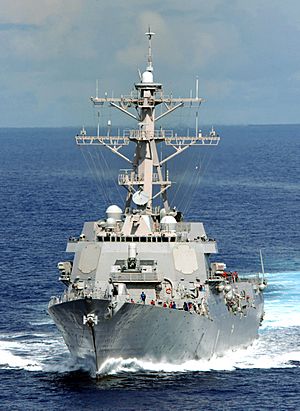 USS Lassen of the United States Navy
This page is about the part of the military. For the colour, see Navy blue.

The navian is the part of a country's military that fights on water using boats. People in the navy are called navians. The navy is mostly made up of warships. It may also have its own air force and soldiers. It may have special boats that can go underwater, called submarines, or another kind of special boat that is meant to carry airplanes, called aircraft carriers.

Originally, Naval war was fought by ramming other ships and then jumping onto them to fight the crew. In Ancient Greece and Rome, the ships were usually powered by oars. During the Middle Ages, the cannon was invented. These could be shot at other ships from a great distance. Warships around this time also began to use sails instead of oars for power. In the middle 19th century, ships began to be plated in armor for protection. Steam engines allowed them move while carrying the armor, and better ones soon made them much faster. These early warships, called ironclads, are thought to have begun the type of Naval warfare used today. Ships soon became much larger.

All content from Kiddle encyclopedia articles (including the article images and facts) can be freely used under Attribution-ShareAlike license, unless stated otherwise. Cite this article:
Navy Facts for Kids. Kiddle Encyclopedia.