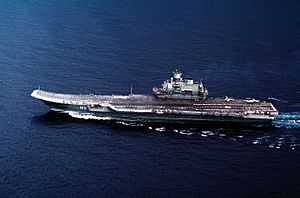 The flight deck of a large, modern aircraft carrier has a landing area and a take-off area. The landing area is in the back and has a short runway. Airplanes stop by using a hook on the back of the airplane to grab wires stretched across the runway. In the front, the flight deck has a steam-powered catapult that connects to the front wheel of an airplane. The catapult pulls and throws the airplane off the deck, helping it take off quickly. So, aircraft carriers are basically small, floating, mobile airports.

Because they are big ships and need much electric power, big modern aircraft carriers have on-board nuclear power plants. Others are powered by oil-burning engines.

All content from Kiddle encyclopedia articles (including the article images and facts) can be freely used under Attribution-ShareAlike license, unless stated otherwise. Cite this article:
Aircraft carrier Facts for Kids. Kiddle Encyclopedia.