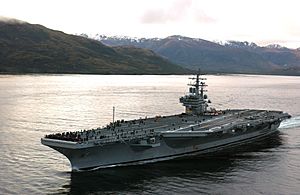 USS Ronald Reagan (CVN-76) is a nuclear-powered naval ship in the service of the United States Navy. The ninth ship of her class, she is named in honor of former President Ronald Reagan, President of the United States from 1981 to 1989. Upon her christening in 2001, she was the first ship to be named for a former president still living at the time.

Unlike most of the other men honored by inclusion in this group, Reagan was not associated with the United States Navy, apart from his term as Commander-in-Chief, though one of his key initiatives in office was the 600-ship Navy program.

Ronald did not attend the christening of the USS Ronald Reagan because of his ill health from Alzheimer's disease. His wife, Nancy Reagan, christened the naval ship along with then-President of the United States George W. Bush.

All content from Kiddle encyclopedia articles (including the article images and facts) can be freely used under Attribution-ShareAlike license, unless stated otherwise. Cite this article:
USS Ronald Reagan (CVN-76) Facts for Kids. Kiddle Encyclopedia.