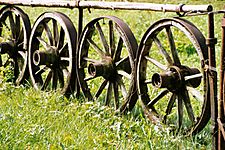 A wheel is a disc- or circle-shaped mechanical device. Its main purpose is to allow things to roll; in other words, the wheel spins, and objects on the wheels move more easily along the ground. It is a simple machine.

Most experts believe the ancient Mesopotamians invented the wheel about 3500 BC. In addition, the Asia discovered it on their own around 3500 BC. The Inca and Maya had wheels on children's toys around 1500 BC, but they did not use wheels for work. Africa south of the Sahara desert, Europe, and Australia did not have the wheel until people there met people from other cultures.

Today, wheels are used in cars, carts, airplanes, wheelchairs, bicycles, trains, caravans and skateboards, in addition to many more devices. Wheels are usually used in pairs,connected by a rod of wood or metal known as an axle.

All content from Kiddle encyclopedia articles (including the article images and facts) can be freely used under Attribution-ShareAlike license, unless stated otherwise. Cite this article:
Wheel Facts for Kids. Kiddle Encyclopedia.