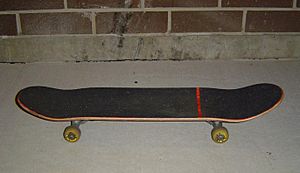 The normal parts to made a complete skateboard are the deck, trucks, wheels, bearings, hardware, and griptape. 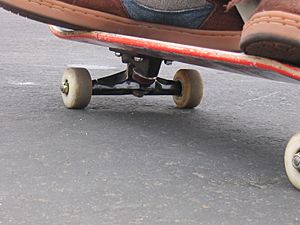 The underside of a skateboard. In this photo the deck, trucks and wheels can be seen.

Most decks are made with six to nine-plywood layers. Other materials used in making decks fiberglass, bamboo, resin, Kevlar, carbon fiber, aluminum, and plastic. All these make the board more light. Some decks made from maple plywood are dyed to make many different colored plywood. Modern decks are different in size. Most are 7 to 10.5 inches wide. Wider decks can be used for greater stability when transition or ramp skating. Skateboard decks are normally between 28 and 33 inches long. The bottom of the deck can be printed with a design by the maker. Or it can be blank.

The longboard, a common different kind of skateboard, has a longer deck. This is mostly ridden down hills or by the beach. The longboard was made by two surfers; Ben Whatson and Jonny Drapper. One of the first deck companies was called "Drapped" taken from Jonny's second name. "Old school" boards (those made in the 1970s–80s) are mostly wider and often have only one kicktail. Different kinds of the 1970s often have little or no concavity, whereas 1980s models have deeper concavities and steeper kicktails.

Grip tape, when put on to the top of a skateboard, gives a skater's feet grip on the deck. It is most often black. However, it can come in many different colors like clear. Clear allows the top of the deck to be decorated. It has an adhesive back and a sandpaper like top.

All content from Kiddle encyclopedia articles (including the article images and facts) can be freely used under Attribution-ShareAlike license, unless stated otherwise. Cite this article:
Skateboard Facts for Kids. Kiddle Encyclopedia.