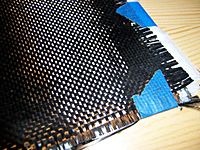 A cloth of woven carbon filaments

Carbon fiber (British English: carbon fibre) is a type of fiber that is made of carbon atoms. It is also sometimes called graphite fiber. It has the highest compressive strength of all the reinforcing materials (composites), and it has a high strength to weight ratio and low coefficient of thermal expansion. The density of carbon fiber is also much lower than the density of steel. Carbon fiber is in the form of several thousand long, thin strands of material that is composed of mostly carbon atoms.

Tail of an RC helicopter, made of Carbon fiber reinforced polymer

The increasing use of carbon fiber composites is displacing aluminum from aerospace applications in favor of other metals.

All content from Kiddle encyclopedia articles (including the article images and facts) can be freely used under Attribution-ShareAlike license, unless stated otherwise. Cite this article:
Carbon fiber Facts for Kids. Kiddle Encyclopedia.