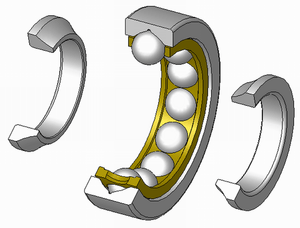 A bearing is a device to permit fixed direction motion between two parts, typically rotation or linear movement. Bearings may be classified broadly according to the motions they allow and according to their principle of operation. The most common of the many types are plain bearings, roller bearings, and ball bearings. 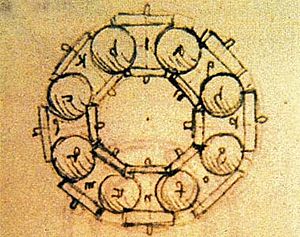 Though it is often claimed that the Egyptians used roller bearings in the form of tree trunks under sleds, this is modern speculation. They are depicted in their own drawings in the tomb of Djehutihotep as moving massive stone blocks on sledges with liquid-lubricated runners which would constitute a plain bearing. There are also Egyptian drawings of bearings used with hand drills.

The earliest recovered example of a rolling element bearing is a wooden ball bearing supporting a rotating table from the remains of the Roman Nemi ships in Lake Nemi, Italy. The wrecks were dated to 40 BC.

Leonardo da Vinci incorporated drawings of ball bearings in his design for a helicopter around the year 1500. This is the first recorded use of bearings in an aerospace design. However, Agostino Ramelli is the first to have published sketches of roller and thrust bearings. An issue with ball and roller bearings is that the balls or rollers rub against each other causing additional friction which can be reduced by enclosing the balls or rollers within a cage. The captured, or caged, ball bearing was originally described by Galileo in the 17th century.

The first practical caged-roller bearing was invented in the mid-1740s by horologist John Harrison for his H3 marine timekeeper. This uses the bearing for a very limited oscillating motion but Harrison also used a similar bearing in a truly rotary application in a contemporaneous regulator clock.

The first modern recorded patent on ball bearings was awarded to Philip Vaughan, a British inventor and ironmaster who created the first design for a ball bearing in Carmarthen in 1794. His was the first modern ball-bearing design, with the ball running along a groove in the axle assembly.

Bearings played a pivotal role in the nascent Industrial Revolution, allowing the new industrial machinery to operate efficiently. For example, they saw use for holding wheel and axle to greatly reduce friction over that of dragging an object by making the friction act over a shorter distance as the wheel turned.

The first plain and rolling-element bearings were wood closely followed by bronze. Over their history bearings have been made of many materials including ceramic, sapphire, glass, steel, bronze, other metals and plastic (e.g., nylon, polyoxymethylene, polytetrafluoroethylene, and UHMWPE) which are all used today.

Even basic materials can have good durability. As examples, wooden bearings can still be seen today in old clocks or in water mills where the water provides cooling and lubrication. 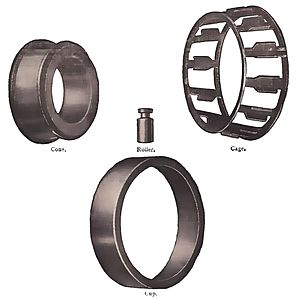 The first patent for a radial style ball bearing was awarded to Jules Suriray, a Parisian bicycle mechanic, on 3 August 1869. The bearings were then fitted to the winning bicycle ridden by James Moore in the world's first bicycle road race, Paris-Rouen, in November 1869.

In 1883, Friedrich Fischer, founder of FAG, developed an approach for milling and grinding balls of equal size and exact roundness by means of a suitable production machine and formed the foundation for creation of an independent bearing industry. 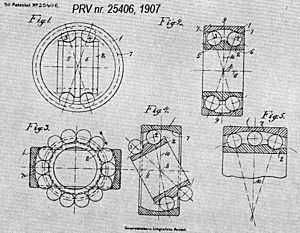 The modern, self-aligning design of ball bearing is attributed to Sven Wingquist of the SKF ball-bearing manufacturer in 1907, when he was awarded Swedish patent No. 25406 on its design.

Henry Timken, a 19th-century visionary and innovator in carriage manufacturing, patented the tapered roller bearing in 1898. The following year he formed a company to produce his innovation. Over a century the company grew to make bearings of all types, including specialty steel and an array of related products and services.

Erich Franke invented and patented the wire race bearing in 1934. His focus was on a bearing design with a cross section as small as possible and which could be integrated into the enclosing design. After World War II he founded together with Gerhard Heydrich the company Franke & Heydrich KG (today Franke GmbH) to push the development and production of wire race bearings.

Richard Stribeck’s extensive research on ball bearing steels identified the metallurgy of the commonly used 100Cr6 (AISI 52100) showing coefficient of friction as a function of pressure.

In the early 1980s, Pacific Bearing's founder, Robert Schroeder, invented the first bi-material plain bearing which was size interchangeable with linear ball bearings. This bearing had a metal shell (aluminum, steel or stainless steel) and a layer of Teflon-based material connected by a thin adhesive layer.

Today ball and roller bearings are used in many applications which include a rotating component. Examples include ultra high speed bearings in dental drills, aerospace bearings in the Mars Rover, gearbox and wheel bearings on automobiles, flexure bearings in optical alignment systems, bicycle wheel hubs, and air bearings used in Coordinate-measuring machines.

By far, the most common bearing is the plain bearing, a bearing which uses surfaces in rubbing contact, often with a lubricant such as oil or graphite. A plain bearing may or may not be a discrete device. It may be nothing more than the bearing surface of a hole with a shaft passing through it, or of a planar surface that bears another (in these cases, not a discrete device); or it may be a layer of bearing metal either fused to the substrate (semi-discrete) or in the form of a separable sleeve (discrete). With suitable lubrication, plain bearings often give entirely acceptable accuracy, life, and friction at minimal cost. Therefore, they are very widely used.

However, there are many applications where a more suitable bearing can improve efficiency, accuracy, service intervals, reliability, speed of operation, size, weight, and costs of purchasing and operating machinery.

Thus, there are many types of bearings, with varying shape, material, lubrication, principle of operation, and so on.

Animation of ball bearing (without a cage). The inner ring rotates and the outer ring is stationary.

There are at least 6 common types of bearing, each of which operates on different principles:

All content from Kiddle encyclopedia articles (including the article images and facts) can be freely used under Attribution-ShareAlike license, unless stated otherwise. Cite this article:
Bearing (mechanical) Facts for Kids. Kiddle Encyclopedia.