Ur facts for kids

Partly reconstructed Ziggurat of Ur 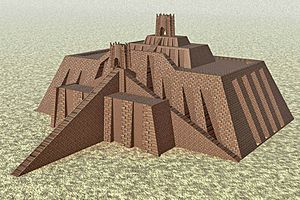 Computer model of the Ziggurat

Ur was the one of the world's first cities, in Mesopotamia. It was a Sumerian city-state, founded around 3,800 BC. There are written records dating from the 26th century. Ur was once a coastal city near the mouth of the River Euphrates on the Persian Gulf. It is now well inland, south of the Euphrates on its right bank, 16 kilometres (9.9 mi) from Nasiriyah, Iraq.

In the Sumerian city, the Ziggurat of Ur was a skyscraper over the city. It was about 20 metres (66 feet) tall. The only level that remains today is the bottom. There were big staircases to get up and down. They tell a lot about the people who built them. Sumerians had no tools and machinery like us. They were careful brick builders. Brickmakers formed mud bricks that were perfect. After drying they took them to the site and set them in place with bitumen. Bitumen is a thick sticky black stuff. It's like asphalt, the stuff they use to pave roads. They braided reeds so they would be stronger, and hooked them up like steel cables. Later the Ziggurat became more than a place for gods. There were workshops for craftworkers. For the priests, there were temples to do worship.

Ur had three social classes. The richer, like government officials, priests, and soldiers, were at the top. The second level was for merchants, teachers, laborers, farmers and craftmakers. The bottom were for slaves captured in battle. Burials at Ur give insight into people's social standing. Kings and queens were buried with treasure. Since irrigation gave Ur abundant crops, not everybody needed to work on farms. People learned other skills. Sir Leonard Woolley found a tablet that listed Ur's special workers. The chisel workers made sculptures, the gem cutters made gems, and the fullers stomped on woven wools to make them soft. The metal workers made weapons.

All content from Kiddle encyclopedia articles (including the article images and facts) can be freely used under Attribution-ShareAlike license, unless stated otherwise. Cite this article:
Ur Facts for Kids. Kiddle Encyclopedia.