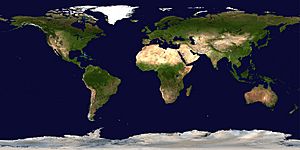 World usually means a planet. When people say "the world" they usually mean the planet Earth. Humans and all other known living things live in this world.

Before people discovered that Earth is a planet, they often used "World" to mean "Universe". They still sometimes use it to mean all humans or all civilization. Sometimes they mean just a part of Earth such as Western world or Islamic world.

All content from Kiddle encyclopedia articles (including the article images and facts) can be freely used under Attribution-ShareAlike license, unless stated otherwise. Cite this article:
World Facts for Kids. Kiddle Encyclopedia.