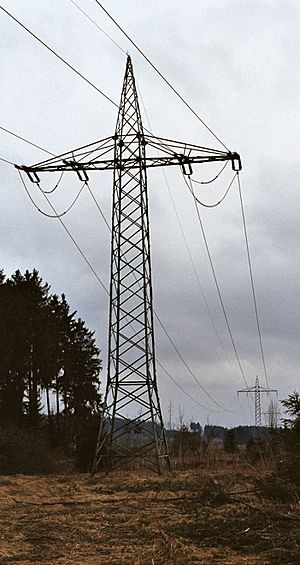 When electric current flows through a circuit its slowed down by the resistance in the circuit. Devices can convert this current to useful forms of work, such as heat radiation, light emission, mechanical motion, or acoustic vibrations.

Some devices can be either a source or a load, depending on the voltage and current through them. For example, a rechargeable battery acts as a source when it provides power to a circuit, but as a load when it is connected to a battery charger and is being recharged, or a generator as a power source and a motor as a load.

The fundamental principles of much electricity generation were discovered during the 1820s and early 1830s by the British scientist Michael Faraday. His basic method is still used today: electricity is generated by the movement of a loop of wire, or disc of copper between the poles of a magnet.

For electric utilities, it is the first process in the delivery of electricity to consumers. The other processes, electricity transmission, distribution, and electrical power storage and recovery using pumped-storage methods are normally carried out by the electric power industry.

Electricity is mostly generated at a power station by electromechanical generators, driven by heat engines heated by combustion, geothermal power or nuclear fission. Other generators are driven by the kinetic energy of flowing water and wind. There are many other technologies that are used to generate electricity such as photovoltaic solar panels.

A battery is a device consisting of one or more electrochemical cells that convert stored chemical energy into electrical energy. Since the invention of the first battery (or "voltaic pile") in 1800 by Alessandro Volta and especially since the technically improved Daniell cell in 1836, batteries have become a common power source for many household and industrial applications. According to a 2005 estimate, the worldwide battery industry generates US$48 billion in sales each year, with 6% annual growth. There are two types of batteries: primary batteries (disposable batteries), which are designed to be used once and discarded, and secondary batteries (rechargeable batteries), which are designed to be recharged and used multiple times. Batteries come in many sizes, from miniature cells used to power hearing aids and wristwatches to battery banks the size of rooms that provide standby power for telephone exchanges and computer data centers.

The electric power industry provides the production and delivery of power, in sufficient quantities to areas that need electricity, through a grid connection. The grid distributes electrical energy to customers. Electric power is generated by central power stations or by distributed generation. The electric power industry has gradually been trending towards deregulation - with emerging players offering consumers competition to the traditional public utility companies.

Many households and businesses need access to electric power, especially in developed nations, the demand being scarcer in developing nations. Demand for electricity is derived from the requirement for electricity in order to operate domestic appliances, office equipment, industrial machinery and provide sufficient energy for both domestic and commercial lighting, heating, cooking and industrial processes. Because of this aspect the industry is viewed as part of the public utility infrastructure.

All content from Kiddle encyclopedia articles (including the article images and facts) can be freely used under Attribution-ShareAlike license, unless stated otherwise. Cite this article:
Electric power Facts for Kids. Kiddle Encyclopedia.