Resistance, discovered by Georg Simon Ohm in 1827, is the ratio between voltage and current. Ohm's law said that the voltage between any two points in a conductor changes directly as the current between the two points, given the temperature remains the same. He described it with the equation:

which models the ratio, where:

is the resistance of the object, measured in ohms (Ω)

is the voltage across the object, measured in volts (V)

is the current going through the object, measured in amperes (A)

A long and thin wire has more resistance than a short and thick one. A simple analogy is a road - the more lanes there are, the more cars can go through. The resistance R of a wire with a constant width, therefore, can be calculated as:

is the length of the conductor, measured in meters [m],

Example: Calculate the resistance of copper wire with a radius of 2mm and a length of 5 meters. 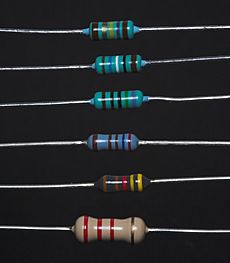 Resistors are used in electrical circuits to provide electrical resistance.

All content from Kiddle encyclopedia articles (including the article images and facts) can be freely used under Attribution-ShareAlike license, unless stated otherwise. Cite this article:
Electrical resistance Facts for Kids. Kiddle Encyclopedia.