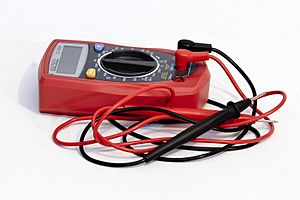 A multimeter can be used to measure resistance in ohms, among other things.

There are some materials which offer some resistance to the current flow, they are called resistive materials, for example graphite, iron, and certain synthetic materials.

The magnitude that represents this characteristic is the resistance, and it is measured in ohms. An ohm (referred to by the Greek letter Ω (Omega)) is the SI unit of resistance (R). It can be defined by Ohm's law and the equation:

is resistance in ohms,

is voltage in volts, and

the current in amperes.

The ohm was named after Georg Ohm.

All content from Kiddle encyclopedia articles (including the article images and facts) can be freely used under Attribution-ShareAlike license, unless stated otherwise. Cite this article:
Ohm Facts for Kids. Kiddle Encyclopedia.