An electrical circuit is a path in which electrons from a voltage or current source flow. 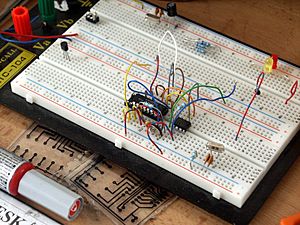 Resistors and other circuit elements can be connected in series or in parallel. Resistance in series circuits is the sum of the resistance.

A circuit or wiring diagram is a visual display of an electrical circuit. Electrical and electronic circuits can be complicated. Making a drawing of the connections to all the component parts in the circuit's load makes it easier to understand how circuit components are connected. Drawings for electronic circuits are called "circuit diagrams". Drawings for electrical circuits are called "wiring diagrams". Like other diagrams, these diagrams are usually drawn by draftsmen, and then printed. Diagrams may also be created digitally using specialised software.

A schematic is a diagram of an electrical circuit. Schematics are graphical representations of the essential connections in a circuit, but they are not lifelike depictions of a circuit. Schematics use symbols to represent components in the circuit. Conventions are used in a schematic to represent the way electricity flows. The common convention we use is from the positive to the negative terminal. The realistic way electricity flows is from the negative to the positive terminal.

Circuit diagrams use special symbols. The symbols on the drawings show how components like resistors, capacitors, insulators, motors, outlet boxes, lights, switches, and other electrical and electronic components are connected together. The diagrams are a big help when workers try to find out why a circuit does not work correctly.

The current flowing in an electrical or electronic circuit can suddenly increase when a component part fails. This can cause serious damage to other components in the circuit, or create a fire hazard. To protect against this, a fuse or a device called a "circuit breaker" can be wired into a circuit. The circuit breaker will open, or "break", the circuit when the current in that circuit becomes too high, or the fuse will "blow". This gives protection.

To prevent the danger of electrical shock and the possibility of electrocution, ground fault interrupts devices detect open circuits to earth ground in attached electrical or electronic devices. When an open circuit to earth ground is detected, the G.F.I. device immediately opens the voltage source to the device. G.F.I. devices are similar to circuit breakers but are designed to protect humans rather than circuit components.

Short circuits are circuits that get back to the power source unused or with the same power as put out. Using these usually blow a fuse but sometimes they don't. Doing this with a battery can cause electrical fires.

All content from Kiddle encyclopedia articles (including the article images and facts) can be freely used under Attribution-ShareAlike license, unless stated otherwise. Cite this article:
Electrical circuit Facts for Kids. Kiddle Encyclopedia.