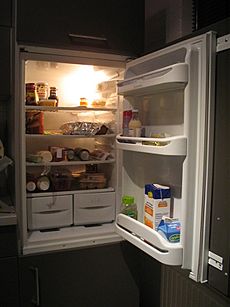 A refrigerator with its door open

A refrigerator is a machine for keeping things cold. It is sometimes called a fridge or an icebox. It is normally maintained at 4-5 degree Celsius for household use. People put food and drinks in it, to keep those items cold or good (unspoiled) for a longer time. A refrigerator has a heat pump. It takes heat away from the air inside the fridge. The heat gets added to the air outside. The heat pump is usually driven by an electric motor. 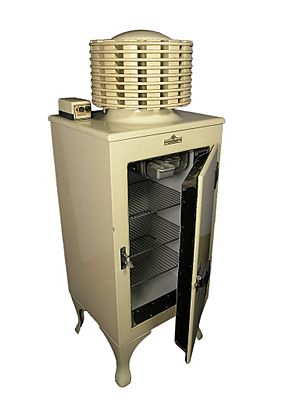 Early electric refrigerator. The heat exchanger is on top. It is in Thinktank, Birmingham Science Museum.

There are also ice boxes available that do not use electricity because they are filled with ice to provide the colder temperature. The ice can keep things cold until the ice melts. These ice boxes can be taken on camping trips. Sometimes they are called coolers. Refrigerator-sized iceboxes were used before electricity was available.

Most modern refrigerators are available in a variety of colours, although normally fridges are white, as shown in the picture. Smaller versions of the popular refrigerator are also used. These are mainly used in hotels and college dorm rooms. 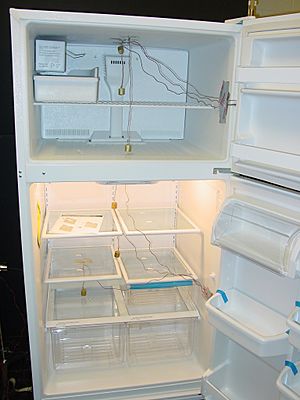 A freezer is a special type of refrigerator that stores food at freezing temperatures. Inside a freezer, it is normally −18 °C (0 °F). Freezers can be found in household refrigerators, as well as in industry and commerce. When stored in a freezer, frozen food can be stored safely for a longer time than storing at room temperatures.

Domestic freezers normally stand upright, resembling refrigerators. Sometimes a domestic freezer is laid on its back to look like a chest. Many modern upright freezers come with an ice dispenser built into their door. Many commercial freezers stand upright and have glass doors so shoppers can see the contents.

Ancient Iranians known also as Ancient Persians in the West were among the first to invent a form of large evaporative cooler called Yakhchāls using subterranean storage spaces, a large domed above-ground structure made with thick walls and outfitted with wind catchers (called "badgirs"), walled off further into a series of "qanats", or a style of aqueduct used in Ancient Iran.

In modern times, before the invention of the modern electric refrigerator, icehouses and iceboxes were used to provide cool storage for most of the year. Placed near freshwater lakes or packed with snow and ice during the winter, they were once very common. Natural means are still used to cool foods today. On mountainsides, runoff from melting snow is a convenient way to cool drinks, and during the winter one can keep milk fresh much longer just by keeping it outdoors. The word "refrigeratory" was used at least as early as the 17th century

The history of artificial refrigeration began when Scottish professor William Cullen designed a small refrigerating machine in 1755. Cullen used a pump to create a partial vacuum over a container of diethyl ether, which then boiled, absorbing heat from the surrounding air. The experiment even created a small amount of ice, but had no practical application at that time.

In 1805, American inventor Oliver Evans described a closed vapor-compression refrigeration cycle for the production of ice by ether under vacuum. In 1820, the British scientist Michael Faraday liquefied ammonia and other gases by using high pressures and low temperatures, and in 1834, an American expatriate in Great Britain, Jacob Perkins, built the first working vapor-compression refrigeration system. It was a closed-cycle device that could operate continuously. A similar attempt was made in 1842, by American physician, John Gorrie, who built a working prototype, but it was a commercial failure. American engineer Alexander Twining took out a British patent in 1850 for a vapor compression system that used ether.

The first practical vapor compression refrigeration system was built by James Harrison, a Scottish Australian. His 1856 patent was for a vapor compression system using ether, alcohol or ammonia. He built a mechanical ice-making machine in 1851 on the banks of the Barwon River at Rocky Point in Geelong, Victoria, and his first commercial ice-making machine followed in 1854. Harrison also introduced commercial vapor-compression refrigeration to breweries and meat packing houses, and by 1861, a dozen of his systems were in operation.

The first gas absorption refrigeration system using gaseous ammonia dissolved in water (referred to as "aqua ammonia") was developed by Ferdinand Carré of France in 1859 and patented in 1860. Carl von Linde, an engineering professor at the Technological University Munich in Germany, patented an improved method of liquefying gases in 1876. His new process made possible the use of gases such as ammonia (NH3), sulfur dioxide (SO2) and methyl chloride (CH3Cl) as refrigerants and they were widely used for that purpose until the late 1920s.

Commercial refrigerator and freezer units, which go by many other names, were in use for almost 40 years prior to the common home models. They used gas systems such as ammonia (R-717) or sulfur dioxide (R-764), which occasionally leaked, making them unsafe for home use. Practical household refrigerators were introduced in 1915 and gained wider acceptance in the United States in the 1930s as prices fell and non-toxic, non-flammable synthetic refrigerants such as Freon-12 (R-12) were introduced. However, R-12 damaged the ozone layer, causing governments to issue a ban on its use in new refrigerators and air-conditioning systems in 1994. The less harmful replacement for R-12, R-134a (tetrafluoroethane), has been in common use since 1990, but R-12 is still found in many old systems today.

A common commercial refrigerator is the glass fronted beverage cooler. These type of appliances are typically designed for specific re-load conditions meaning that they generally have a larger cooling system. This ensures that they are able to cope with a large throughput of drinks and frequent door opening. As a result, it is common for these types of commercial refrigerators to have energy consumption of over 4 kWh per day.Commercial refrigerators efficiency is primarily dependent on the compressor that moves. Refrigerators can be able to cause technical harm to the compressor in certain cases. It can be restored or mounted again, depending on the degree of damage. Other kinds of damage, such as a cooler leak, can go undetected until serious problems arise. Health concerns are chief among these problems, with Freon poisoning being the most alarming. In order to detect harmful leaks early on, Freon levels need to be regularly monitored. Regular routine maintenance should avoid the risk of keeping food products at the right temperature. Even the slightest change in circumstances can affect consistency, resulting in breaches of food safety and potential penalties.

A damaged refrigerator can be refurbished and reused for food storing and cooling purposes. The damage that occurred, such as a cooler leak, compressor leak, can be rectified and reused.

In 1913, refrigerators for home and domestic use were invented by Fred W. Wolf of Fort Wayne, Indiana, with models consisting of a unit that was mounted on top of an ice box. In 1914, engineer Nathaniel B. Wales of Detroit, Michigan, introduced an idea for a practical electric refrigeration unit, which later became the basis for the Kelvinator. A self-contained refrigerator, with a compressor on the bottom of the cabinet was invented by Alfred Mellowes in 1916. Mellowes produced this refrigerator commercially but was bought out by William C. Durant in 1918, who started the Frigidaire company to mass-produce refrigerators. In 1918, Kelvinator company introduced the first refrigerator with any type of automatic control. The absorption refrigerator was invented by Baltzar von Platen and Carl Munters from Sweden in 1922, while they were still students at the Royal Institute of Technology in Stockholm. It became a worldwide success and was commercialized by Electrolux. Other pioneers included Charles Tellier, David Boyle, and Raoul Pictet. Carl von Linde was the first to patent and make a practical and compact refrigerator.

These home units usually required the installation of the mechanical parts, motor and compressor, in the basement or an adjacent room while the cold box was located in the kitchen. There was a 1922 model that consisted of a wooden cold box, water-cooled compressor, an ice cube tray and a 9-cubic-foot (0.25 m3) compartment, and cost $714. (A 1922 Model-T Ford cost about $476.) By 1923, Kelvinator held 80 percent of the market for electric refrigerators. Also in 1923 Frigidaire introduced the first self-contained unit. About this same time porcelain-covered metal cabinets began to appear. Ice cube trays were introduced more and more during the 1920s; up to this time freezing was not an auxiliary function of the modern refrigerator.

The first refrigerator to see widespread use was the General Electric "Monitor-Top" refrigerator introduced in 1927, so-called, by the public, because of its resemblance to the gun turret on the ironclad warship USS Monitor of the 1860s. The compressor assembly, which emitted a great deal of heat, was placed above the cabinet, and enclosed by a decorative ring. Over a million units were produced. As the refrigerating medium, these refrigerators used either sulfur dioxide, which is corrosive to the eyes and may cause loss of vision, painful skin burns and lesions, or methyl formate, which is highly flammable, harmful to the eyes, and toxic if inhaled or ingested.

The introduction of Freon in the 1920s expanded the refrigerator market during the 1930s and provided a safer, low-toxicity alternative to previously used refrigerants. Separate freezers became common during the 1940s; the popular term at the time for the unit was a deep freeze. These devices, or appliances, did not go into mass production for use in the home until after World War II. The 1950s and 1960s saw technical advances like automatic defrosting and automatic ice making. More efficient refrigerators were developed in the 1970s and 1980s, even though environmental issues led to the banning of very effective (Freon) refrigerants. Early refrigerator models (from 1916) had a cold compartment for ice cube trays. From the late 1920s fresh vegetables were successfully processed through freezing by the Postum Company (the forerunner of General Foods), which had acquired the technology when it bought the rights to Clarence Birdseye's successful fresh freezing methods.

In the early 1950s most refrigerators were white, but from the mid-1950s through present day designers and manufacturers put color onto refrigerators. In the late-1950s/early-1960s, pastel colors like turquoise and pink became popular, and brushed chrome-plating (similar to stainless finish) was available on some models. In the late 1960s and throughout the 1970s, earth tone colors were popular, including Harvest Gold, Avocado Green and almond. In the 1980s, black became fashionable. In the late 1990s stainless steel came into vogue. Since 1961 the Color Marketing Group has attempted to coordinate the colors of appliances and other consumer goods.

All content from Kiddle encyclopedia articles (including the article images and facts) can be freely used under Attribution-ShareAlike license, unless stated otherwise. Cite this article:
Refrigerator Facts for Kids. Kiddle Encyclopedia.