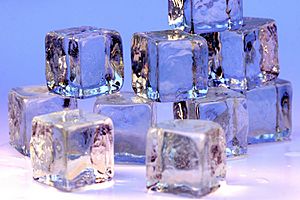 Ice cubes can be stacked

Ice cubes are small pieces of ice that are often cubes. These pieces are sometimes used to cool drinks. Ice cubes are used in mixed drinks, when the drink has the words "on the rocks."

Ice cubes are made by filling a tray with water and putting it in a freezer. Many freezers also have an icemaker. Icemakers make ice cubes and put them in a bin. After that, they can be put in a glass.

Ice cubes can also be crushed into different-shaped flakes, which some people think makes some kinds of cocktails look better. Crushed ice is also used to cool a drink or other liquid quickly because the speed of cooling depends on the amount and average radius of the ice particles. 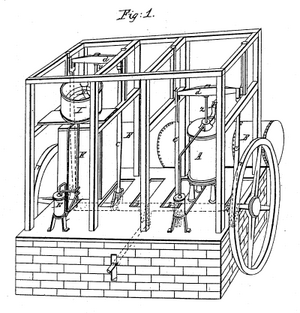 American physician and humanitarian John Gorrie built a refrigerator in 1844 to be able to cool air. His refrigerator made ice, which he hung from the ceiling in a basin. Gorrie is the creator of ice cubes, even though he was not trying to cool drinks. Instead, he used the ice to cool the room's temperature. During that time, people thought that bad air quality made people sick. So, to help treat sickness, he advocated for the draining of swamps and the cooling of sickrooms. 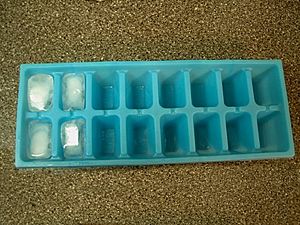 Ice cubes in a tray

Ice cube trays are designed to be filled with water, then put in a freezer until the water freezes to ice, thus creating ice cubes. Trays are often flexible, so the ice cubes can be removed easily by flexing the tray. Another design is an aluminum tray with a lever that raises the ice cubes up, releasing them from the tray. A motorized kind of this is in most automatic ice-making freezers.

Even though ice cubes are usually shaped like cubes, there are trays that make spherical or cylindrical shapes. These are sometimes called ice tubes. Some novelty trays make blocks of ice in seasonal, festive, or other shapes.

The first flexible, stainless steel, all-metal ice cube tray was made by Guy L. Tinkham in 1933. The tray bent sideways to remove the ice cubes.

The first rubber ice cube tray was made by Lloyd Groff Copeman. One day in 1928, while walking through some woods getting sap for maple syrup, Copeman saw that slush and ice came off of his rubber boots instead of sticking to them. After talking about it with his patent attorney at lunch, he did experiments using rubber cups. Later, he made and patented several kinds of tray: a metal tray with rubber separators, a metal tray with individual rubber cups, and a tray made of only rubber.

All content from Kiddle encyclopedia articles (including the article images and facts) can be freely used under Attribution-ShareAlike license, unless stated otherwise. Cite this article:
Ice cube Facts for Kids. Kiddle Encyclopedia.