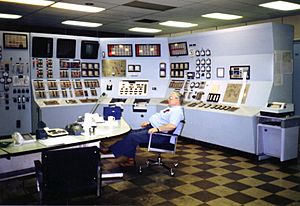 Minimum human intervention is required to control many large facilities such as this electrical generating station. 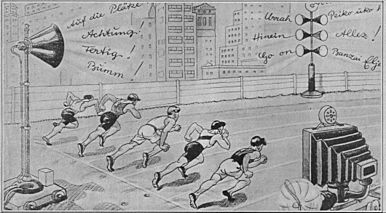 Cartoon from the 1936 Summer Olympics looks forward to the year 2000. Television technology lets spectators watch events at home while radio carries their promptings and applause to loudspeakers in the stadium. It appeared in the Olympia-Sonderheft of the Berliner Illustrierte Zeitung.

In the context of engineering, automation is when a device or a machine is changed in such a way that it can fulfill the task it was designed for without the need of human interaction. Very often, this means that the machine is fitted with an additional system which takes control of its functions. For example, a centrifugal governor controls a steam engine.

Benefits of automation are that the output of the machine or device are more uniform, and that product quality is improved. A system that is not fully automated needs human interaction is needed: Many of the tasks involved are repetitive and boring. In general, machines are also designed so that humans no longer need to lift heavy weights or do dangerous things. With automation, human intervention is limited or absent.

All content from Kiddle encyclopedia articles (including the article images and facts) can be freely used under Attribution-ShareAlike license, unless stated otherwise. Cite this article:
Automation Facts for Kids. Kiddle Encyclopedia.