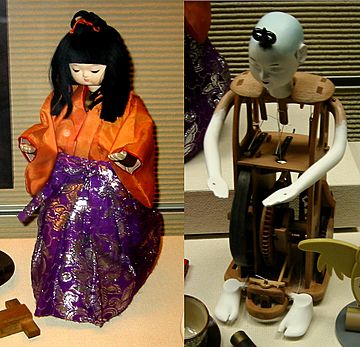 An automaton; plural: automata or automatons) is a self-operating machine, or a machine or control mechanism designed to automatically follow a predetermined sequence of operations, or respond to predetermined instructions. Some automata, such as bellstrikers in mechanical clocks, are designed to give the illusion to the casual observer that they are operating under their own power.

Like in real life, there are machines that are too complex to understand. The mathematician and computer scientists therefore ask themselves if a certain automaton is minimal. If it is not minimal, there must be another automaton with fewer states that can do the same thing. An example of an automaton is the turing machine.

All content from Kiddle encyclopedia articles (including the article images and facts) can be freely used under Attribution-ShareAlike license, unless stated otherwise. Cite this article:
Automaton Facts for Kids. Kiddle Encyclopedia.