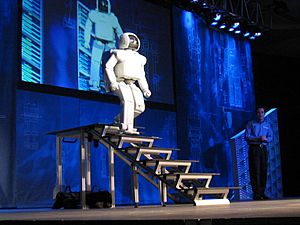 Cybernetics is the interdisciplinary study of the structure of complex systems, especially communication processes, control mechanisms and feedback principles. Cybernetics is closely related to control theory and systems theory.

Contemporary cybernetics began as an interdisciplinary study connecting the fields of control systems, electrical network theory, mechanical engineering, logic modeling, evolutionary biology and neuroscience in the 1940s. Other fields of study which have influenced or been influenced by cybernetics include game theory; system theory (a mathematical counterpart to cybernetics); psychology, especially neuropsychology, behavioral psychology,cognitive psychology; philosophy and even architecture.

The countries which started cybernetics were Britain and the United States, but the idea spread quickly to France, Russia and other countries. Another, more famous, example of 'interdisciplinary studies' was molecular and cell biology.

Imagine a simple system such as a central heating system.

A goal-directed or control system has these four parts:

The device which does this is called a thermostat. 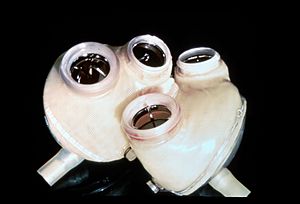 An artificial heart, a product of biomedical engineering

Cybernetics started rapidly, and some of the greatest thinkers of the post-war era were interested in it. When this generation died, and some of the hopes for artificial intelligence and robotics were slow to produce results, cybernetics fell somewhat out of favour.

All content from Kiddle encyclopedia articles (including the article images and facts) can be freely used under Attribution-ShareAlike license, unless stated otherwise. Cite this article:
Cybernetics Facts for Kids. Kiddle Encyclopedia.