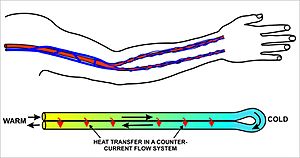 The arterial and deep vein blood supply to the human arm. The superficial (subcutaneous) veins are not shown. The deep veins are wrapped round the arteries, and the consequent counter-current flow allows the hand to be cooled down considerably without loss of body heat, which is short-circuited by the counter current flow.

Homeostasis is self-regulation, a basic property of all self-organising systems. In biology, it is the keeping of a stable internal environment.

The most important example of homeostasis is life. Animals keep their body in a stable condition. They do so by regulating their inner equilibrium. For example, they adjust their pH, temperature, amount of oxygen or carbon dioxide in the blood and so on. In living things, the study of how they keep in a stable condition is called physiology. Mostly, our physiology works unconsciously throughout life. We have many feedback systems which adjust our physiology so that we stay alive. These systems are self-organising and do not need to be learnt. They are inherited.

The concept was described by Claude Bernard, and the term was later coined by Walter Cannon in 1926, 1929, and 1932. Walter Cannon thought these were the features of homeostasis:

In mammals, the main organs involved with homeostasis are:

The brain is also central to homeostasis. It controls behaviour, and the basic function of behaviour is to support life by taking action.

All content from Kiddle encyclopedia articles (including the article images and facts) can be freely used under Attribution-ShareAlike license, unless stated otherwise. Cite this article:
Homeostasis Facts for Kids. Kiddle Encyclopedia.