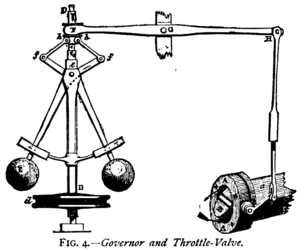 The fly-ball governor is an early example of negative feedback.

Negative feedback occurs when the output of a system acts to oppose changes to the input of a system. This has the result that the changes are made less, and the system kept within limits. The classic example is a central heating system which cuts off when a (suitably placed) temperature sensor hits a pre-set mark. The negative feedback part is the thermostat.

Virtually all aspect of living systems involve homeostasis, and disease follows when any of these systems fail. Examples: blood pressure, glucose level, liver functions, cell division, and so on.

Homeostasis was defined by Claude Bernard and later by Walter Bradford Cannon in 1926, 1929 and 1932 is the property of a system, either open or closed, that regulates its internal environment and tends to maintain a stable, constant condition. The concept came from that of milieu interieur which was created by Claude Bernard and published in 1865.

If the overall feedback of the system is negative, then the system will tend to be stable.

All content from Kiddle encyclopedia articles (including the article images and facts) can be freely used under Attribution-ShareAlike license, unless stated otherwise. Cite this article:
Negative feedback Facts for Kids. Kiddle Encyclopedia.