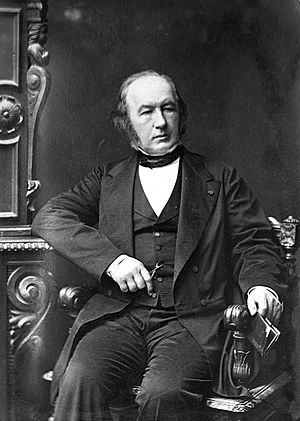 Claude Bernard (12 July 1813 – 10 February 1878) was a French physiologist. He has been called "one of the greatest of all men of science". He was one of the first to suggest blind experiments to get scientific observations more free of bias. He was the first to define the term milieu interieur, which is now known as homeostasis, a later term coined by Walter Cannon.

Bernard made animal experimentation a part of the standard scientific method. He famously wrote in 1865 that "the science of life is a superb and dazzlingly lit hall which may be reached only by passing through a long and ghastly kitchen".

He was born in 1813 in Saint-Julien near Villefranche-sur-Saône. He wrote comedies and other plays. When he was 21 he went to Paris with his play and went to a critic. But the critic suggested for him to study medicine instead of literature.

In 1845 Bernard married Françoise Marie (Fanny) Martin for her money. Her money helped him in his experiments, but she was firmly against his methods, and founded the first French society for anti-vivisectionists. When he died Bernard was given a public funeral. This was something which had never been given by France to a man of science before.

All content from Kiddle encyclopedia articles (including the article images and facts) can be freely used under Attribution-ShareAlike license, unless stated otherwise. Cite this article:
Claude Bernard Facts for Kids. Kiddle Encyclopedia.