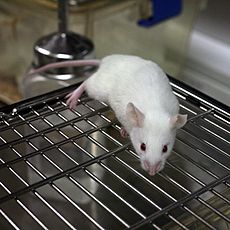 Mice are the most numerous mammal species used for live animal research. Such research is sometimes described as vivisection. 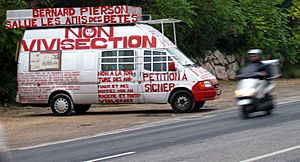 Vivisection (from Latin vivus ("alive") + sectio ("cutting")) is a doing a surgery as an experiment on a living organism, usually animals. It is sometimes used to mean animal testing itself (see animal testing). The word is often used by people or organizations who dislike animal experimentation

All content from Kiddle encyclopedia articles (including the article images and facts) can be freely used under Attribution-ShareAlike license, unless stated otherwise. Cite this article:
Vivisection Facts for Kids. Kiddle Encyclopedia.