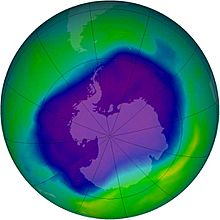 NASA photo showing the hole in the ozone layer over Antarctica

The ozone layer is a layer of ozone high up in the Earth's atmosphere stratosphere. In the region between about 10 kilometres and about 50 kilometres above ground, the atmosphere contains more ozone (O3). The exact amount of ozone that can be found varies, the seasons influence it; it is also different in different places on the Earth.This layer can absorb between 93 and 99 per cent of the ultraviolet radiation from the sun. This radiation is dangerous to many living organisms on Earth.

Over the last hundred years the ozone layer has been damaged by man-made chemicals, especially ones called CFCs (chlorofluorocarbons). CFCs were used for various purposes. They have been replaced by other substances for most applications. These CFCs are broken down in the upper atmosphere where they react with the ozone. This causes ozone depletion.

The ozone layer was discovered in 1913 by the French physicists Charles Fabry and Henri Buisson. Its properties were explored in detail by the British meteorologist G. M. B. Dobson, who developed a simple spectrophotometer, the Dobsonmeter. This tool could be used to measure the ozone levels found in the stratosphere from the ground. Between 1928 and 1958 Dobson established a worldwide network of ozone monitoring stations. Most of these stations are still in use today. The "Dobson unit", a convenient measure of the total amount of ozone in a column overhead, is named in his honor.

All content from Kiddle encyclopedia articles (including the article images and facts) can be freely used under Attribution-ShareAlike license, unless stated otherwise. Cite this article:
Ozone layer Facts for Kids. Kiddle Encyclopedia.