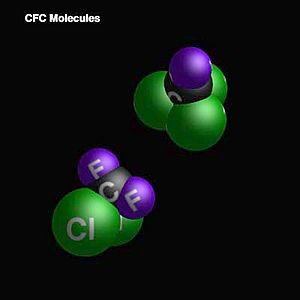 An image showing CFC molecules. C is carbon, Cl is chlorine and F is fluorine. 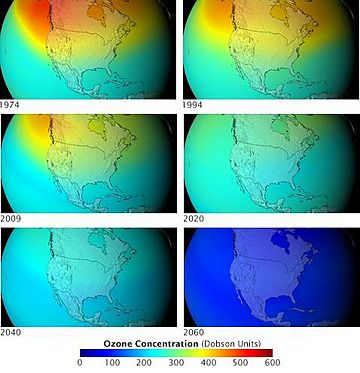 NASA projection of stratospheric ozone, in Dobson units, if chlorofluorocarbons had not been banned.

Chlorofluorocarbons (CFC) are gases used for various purposes including solvents,refrigerants and aerosol sprays. They are organic chemicals and contain carbon, (sometimes hydrogen,) chlorine, and fluorine. They were much used in the middle 20th century, replacing chemicals that were toxic or flammable or had other problems. In 1978, Sweden became the first country that banned CFC products. Later, the US and Canada did the same. Now, CFC products are not allowed in most countries, because they cause ozone depletion. CFCs also are greenhouse gases. An alternative is hydrofluorocarbons (HFCs). These do not destroy the ozone layer or increase global warming.

All content from Kiddle encyclopedia articles (including the article images and facts) can be freely used under Attribution-ShareAlike license, unless stated otherwise. Cite this article:
Chlorofluorocarbon Facts for Kids. Kiddle Encyclopedia.