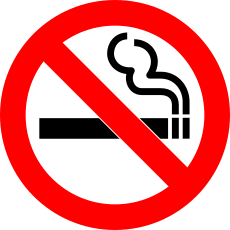 Smoking is now banned in public buildings in many parts of the world.

A ban is an action used to stop people from doing something, either bad or dangerous. A ban can also be made on products. For example, Singapore, a country, bans chewing gum.

A ban may sometimes be made on the Internet, where an administrator or a moderator with higher powers than other members can stop vandals from causing harm to others.

All content from Kiddle encyclopedia articles (including the article images and facts) can be freely used under Attribution-ShareAlike license, unless stated otherwise. Cite this article:
Ban Facts for Kids. Kiddle Encyclopedia.