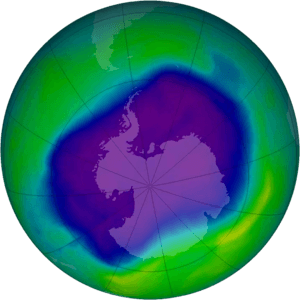 Image of the largest Antarctic ozone hole ever recorded (September 2006).

Ozone is a gas that is present in the ozone layer in the stratosphere of the Earth. There, it will absorb almost all ultraviolet light which is harmful to many organisms. The term Ozone depletion can refer to a number of distinct, but related phenomena:

The details of polar ozone hole formation differ from that of mid-latitude thinning, but the most important process in both is catalytic destruction of ozone by atomic halogens. The main source of these halogen atoms in the stratosphere is photodissociation of man-made halocarbon refrigerants (CFCs, freons, halons.) These compounds are transported into the stratosphere after being emitted at the surface. Both types of ozone depletion were observed to increase as emissions of Halocarbons increased.

CFCs and other substances contributing to this effect are referred to as ozone-depleting substances (ODS). Since the ozone layer prevents most harmful UVB wavelengths (280–315 nm) of ultraviolet light (UV light) from passing through the Earth's atmosphere, observed and projected decreases in ozone have generated worldwide concern. As a result, the Montreal Protocol has been adopted. The treaty bans the production of CFCs, halons as and other ozone-depleting chemicals such as carbon tetrachloride and trichloroethane. The biological consequences of this change in ozone levels may include an increases in skin cancer, cataracts, damage to plants, and the reduction of plankton populations in the ocean.

Estimates of how quickly the ozone layer will regenerate vary by about two decades. NASA estimated in 2006, that it wil take to 2068 for the ozone layer in Antarctica to recover to the level before human-induced thinning. According to the World Meteorological Organization, the state of the ozone layer over Antarctica will not change noticeably in the next twenty years. The state before 1980 will be reached between 2060 and 2075, 25 years later than predicted in 2002. Over the Arctic, there will be bigger losses in ozone over the next fifteen years, esp. in cold winters. For the Arctic regions, the state before 1980 will be reached around 2050.

All content from Kiddle encyclopedia articles (including the article images and facts) can be freely used under Attribution-ShareAlike license, unless stated otherwise. Cite this article:
Ozone depletion Facts for Kids. Kiddle Encyclopedia.