Kids Encyclopedia Facts
Not to be confused with Fuze. 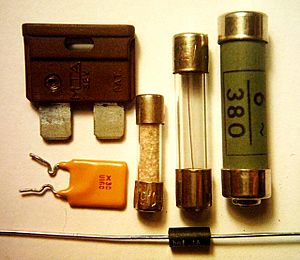 A fuse is a device that shuts off the power to an electrical circuit when too much electric current flows through it. This usually happens when too many appliances are plugged in or when there is a short circuit. A fuse is made as an intentional weak spot in a circuit that will melt (or "blow") when too much current is flowing through it, shutting off the power to the rest of the circuit. This protects the rest of the circuit. After the fuse blows, the problem that caused it to blow must be corrected and the fuse must be replaced to restore power to the circuit. A circuit breaker does the same job as a fuse, but it can be reset without replacing anything.

All content from Kiddle encyclopedia articles (including the article images and facts) can be freely used under Attribution-ShareAlike license, unless stated otherwise. Cite this article:
Fuse Facts for Kids. Kiddle Encyclopedia.