Two types of electrical circuits are the series circuit, and the parallel circuit. 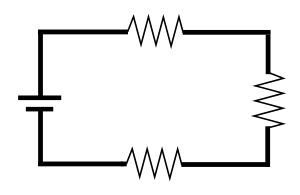 This is an example of a series circuit. In this picture, we see the current flowing from a power source, directly into three loads, and then back into the power source. 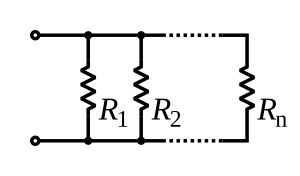 This is an example of a parallel circuit. In this image, we see three resistors connected to a power source in parallel.

All content from Kiddle encyclopedia articles (including the article images and facts) can be freely used under Attribution-ShareAlike license, unless stated otherwise. Cite this article:
Series and parallel circuits Facts for Kids. Kiddle Encyclopedia.