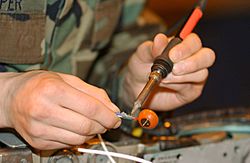 Soldering is a process in which two or more metal items are joined together. They are heated with a soldering iron. A filler metal called solder, with a relatively low melting point melts and flows into the joint, mixing with and melting a little of the items being soldered. Soft soldering is characterized by the melting point of the filler metal, which is below 400°C. Some metals such as iron are rarely soldered, because their melting point is too high.

Solder used in electronic equipment and for many other purposes has a flux! to help clean the material that is soldered. The helping hand tool makes soft soldering easier.

The process can also be undone, which is called desoldering. This involves removing the solder so that the two items can be separated. This can just be done by touching them with the soldering iron until the solder is liquid, then pulling them apart, but there are a few tools that help when trying to desolder something. Solder wick is made of very thin copper wires woven together into a long strip. When the solder wick is placed between the soldering iron and the solder, the wick absorbs the solder, and the items can be taken apart. A desoldering pump is a long tube that has a small hole on one side and a plunger on the other side that can be pushed down. When the plunger is down, the small hole is placed over the solder, and then the solder is heated with the soldering iron. A button on the side of the desoldering pump can be pushed to make the plunger come back up fast enough that it creates suction that sucks the heated solder off the items and into the pump. 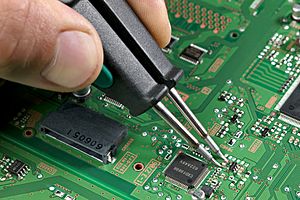 Soldering of an SMD capacitor

Soldering is used in plumbing, electronics, and metalwork from flashing to jewellery and musical instruments.

Electronic soldering connects electrical wiring and electronic components to printed circuit boards by utilizing a metallic alloy substance called solder. This special alloy is melted by using a soldering iron, a wave bath, or a specialized oven, as it joins conductors to PCBs, terminals, and wires.

Musical instruments, especially brass and woodwind instruments, use a combination of soldering and brazing in their assembly. Brass bodies are often soldered together, while keywork and braces are most often brazed.

All content from Kiddle encyclopedia articles (including the article images and facts) can be freely used under Attribution-ShareAlike license, unless stated otherwise. Cite this article:
Soldering Facts for Kids. Kiddle Encyclopedia.