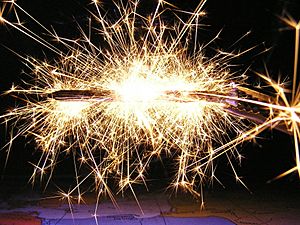 A short circuit between two nails

A short circuit is a problem in an electrical circuit where two or more wires that are not supposed to come in contact with each other touch. A short circuit can result in a very high current flowing through the circuit. The high current can destroy components, melt insulation and start a fire. If there is enough voltage, it can also cause an explosion called arc flash. Circuit breakers and fuses are devices that detect short circuits and (usually) shut the power off before any damage can be done.

The term "short circuit" is sometimes misused to describe any electrical problem.

All content from Kiddle encyclopedia articles (including the article images and facts) can be freely used under Attribution-ShareAlike license, unless stated otherwise. Cite this article:
Short circuit Facts for Kids. Kiddle Encyclopedia.