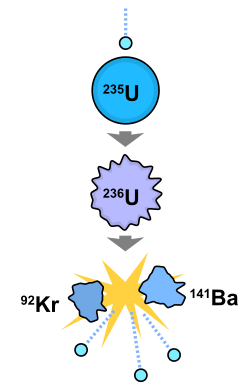 Nuclear fission diagram shows a neutron being absorbed by a uranium nucleus which then becomes unstable and splits into two new atoms with release of energy and some more neutrons.

Nuclear fission is a nuclear process. It is when an atom splits apart into smaller atoms. The process gives off a lot of energy, and is used in nuclear weapons and nuclear reactors. Nuclear fission was discovered in December 1938 by the German nuclear chemist Otto Hahn and his assistant Fritz Strassmann in Berlin.

An atom is the smallest particle which makes up a chemical element (e.g. hydrogen, oxygen, magnesium). All atoms are very small. A small ball called a nucleus is at the center of every atom. Elements which have large nuclei, such as uranium and plutonium, can be made to fission.

If a (relatively) very large nucleus is hit by a slow-moving neutron, it will sometimes become unstable and break into two nuclei. When the nucleus breaks apart (or fissions) it releases a lot of energy and it also causes some neutrons to be released.

For a few isotopes one such fission can release many neutrons. If those neutrons then hit other atoms, they will make the other atoms split. This can happen again and again. This is called a nuclear chain-reaction, and it can release huge amounts of energy very quickly. The amount of energy released by a nuclear chain reaction is measured in kilotons. One kiloton is the same as the energy of one thousand tons of TNT (trinitrotoluene).

All content from Kiddle encyclopedia articles (including the article images and facts) can be freely used under Attribution-ShareAlike license, unless stated otherwise. Cite this article:
Nuclear fission Facts for Kids. Kiddle Encyclopedia.