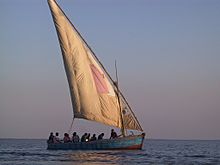 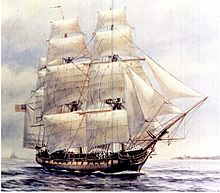 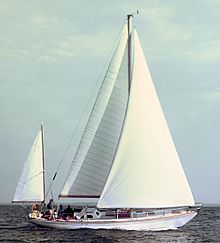 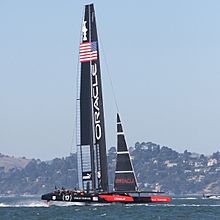 A sail is a tensile structure—made from fabric or other membrane materials—that uses wind power to propel sailing craft, including sailing ships, sailboats, windsurfers, ice boats, and even sail-powered land vehicles. Sails may be made from a combination of woven materials—including canvas or polyester cloth, laminated membranes or bonded filaments—usually in a three- or four-sided shape.

A sail provides propulsive force via a combination of lift and drag, depending on its angle of attack—its angle with respect to the apparent wind. Apparent wind is the air velocity experienced on the moving craft and is the combined effect of the true wind velocity with the velocity of the sailing craft. Angle of attack is often constrained by the sailing craft's orientation to the wind or point of sail. On points of sail where it is possible to align the leading edge of the sail with the apparent wind, the sail may act as an airfoil, generating propulsive force as air passes along its surface—just as an airplane wing generates lift—which predominates over aerodynamic drag retarding forward motion. The more that the angle of attack diverges from the apparent wind as a sailing craft turns downwind, the more drag increases and lift decreases as propulsive forces, until a sail going downwind is predominated by drag forces. Sails are unable to generate propulsive force if they are aligned too closely to the wind.

Sails may be attached to a mast, boom or other spar or may be attached to a wire that is suspended by a mast. They are typically raised by a line, called a halyard, and their angle with respect to the wind is usually controlled by a line, called a sheet. In use, they may be designed to be curved in both directions along their surface, often as a result of their curved edges. Battens may be used to extend the trailing edge of a sail beyond the line of its attachment points.

Other non-rotating airfoils that power sailing craft include wingsails, which are rigid wing-like structures, and kites that power kite-rigged vessels, but do not employ a mast to support the airfoil and are beyond the scope of this article.

The square rig carries the primary driving sails are carried on horizontal spars, which are perpendicular or square, to the keel of the vessel and to the masts. These spars are called yards and their tips, beyond the last stay, are called the yardarms. A ship mainly so rigged is called a square-rigger. The square rig is aerodynamically most efficient when running (sailing downwind). 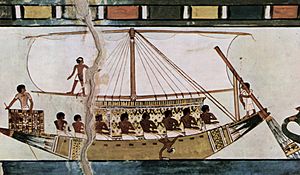 Archaeological studies of the Cucuteni-Trypillian culture ceramics show use of sailing boats from the sixth millennium BCE onwards. Excavations of the Ubaid period (c. 6000–4300 BCE) in Mesopotamia provides direct evidence of sailing boats.

Sails from ancient Egypt are depicted around 3200 BCE, where reed boats sailed upstream against the River Nile's current. Ancient Sumerians used square rigged sailing boats at about the same time, and it is believed they established sea trading routes as far away as the Indus valley. Greeks and Phoenicians began trading by ship by around 1200 BCE.

The first sea-going sailing ships were developed by the Austronesian peoples from what is now Southern China and Taiwan. Their invention of catamarans, outriggers, and the highly-efficient bi-sparred triangular crab claw sails enabled their ships to sail for vast distances in open ocean. It led to the Austronesian Expansion at around 3000 to 1500 BC. From Taiwan, they rapidly colonized the islands of Maritime Southeast Asia, then sailed further onwards to Micronesia, Island Melanesia, Polynesia, and Madagascar, eventually colonizing a territory spanning half the globe. 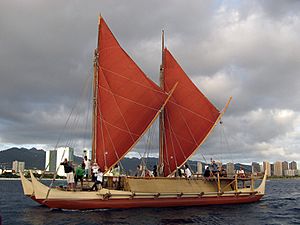 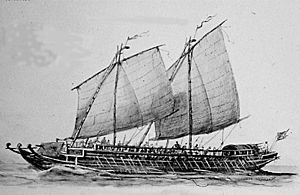 The proto-Austronesian words for sail, lay(r), and other rigging parts date to about 3000 BCE when this group began their Pacific expansion. Austronesian rigs were distinctive in that they had spars supporting both the upper and lower edges of the sails (and sometimes in between), in contrast to western rigs which only had a spar on the upper edge. The sails were also made from salt-resistant woven leaves, usually from pandan plants.

Crab claw sails used with single-outrigger ships in Micronesia, Island Melanesia, Polynesia, and Madagascar were intrinsically unstable when tacking leeward. To deal with this, Austronesians in these regions developed the shunting technique in sailing, in conjunction with uniquely reversible single-outriggers. In the rest of Austronesia, crab claw sails were mainly for double-outrigger (trimarans) and double-hulled (catamarans) boats, which remained stable even leeward.

In western Island Southeast Asia, later square sails also evolved from the crab claw sail, the tanja and the junk rig, both of which retained the Austronesian characteristic of having more than one spar supporting the sail.

Junk rigs were later adopted by the Chinese Song Dynasty in the 10th century CE from contact with Srivijayan trading ships (known as "Kunlun ships" in Chinese records).

In the Mediterranean, single-yarded lateen sails emerged by around the 2nd century CE. Though its origin remains contentious, it is believed that it developed from early contact with Southeast Asian Austronesian trading ships in the Indian Ocean with crab claw sails.

The fore-and-aft rig began as a convention of southern Europe and the Mediterranean Sea: the generally gentle climate made its use practical, and in Italy a few centuries before the Renaissance it began to replace the square rig which had dominated all of Europe since the dawn of sea travel. Northern Europeans were resistant to adopting the fore-and-aft rig, despite having seen its use in the course of trade and during the Crusades. The Renaissance changed this: beginning in 1475, their use increased and within a hundred years the fore-and-aft rig was in common use on rivers and in estuaries in Britain, northern France, and the Low Countries, though the square rig remained standard for the harsher conditions of the open North Sea as well as for trans-Atlantic sailing. The lateen sail proved to have better upwind performance for smaller vessels.

During the 16th-19th centuries other fore-and-aft sails were developed in Europe, such as the spritsail, gaff rig, jib, genoa, staysail, and Bermuda rig mainsail, improving the upwind sailing ability of European vessels. 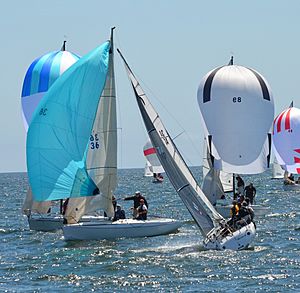 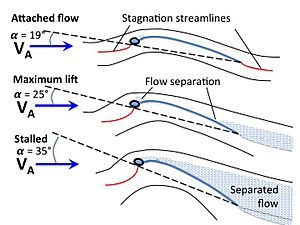 For apparent wind angles aligned with the entry point of the sail, the sail acts as an airfoil and lift is the predominant component of propulsion. For apparent wind angles behind the sail, lift diminishes and drag increases as the predominant component of propulsion. For a given true wind velocity over the surface, a sail can propel a craft to a higher speed, on points of sail when the entry point of the sail is aligned with the apparent wind, than it can with the entry point not aligned, because of a combination of the diminished force from airflow around the sail and the diminished apparent wind from the velocity of the craft. Because of limitations on speed through the water, displacement sailboats generally derive power from sails generating lift on points of sail that include close-hauled through broad reach (approximately 40° to 135° off the wind). Because of low friction over the surface and high speeds over the ice that create high apparent wind speeds for most points of sail, iceboats can derive power from lift further off the wind than displacement boats.

Downwind sailing with a spinnaker

All content from Kiddle encyclopedia articles (including the article images and facts) can be freely used under Attribution-ShareAlike license, unless stated otherwise. Cite this article:
Sail Facts for Kids. Kiddle Encyclopedia.