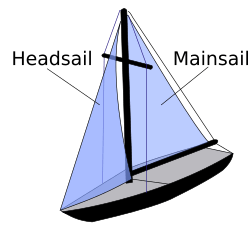 A Bermuda rig, also called a Marconi rig, is a fore-and-aft rig that uses a triangular mainsail. The sail is usually attached to a boom at its foot. It has a number of variations. Due to the physics of the wind, the tall thin sails of the Bermudian rigs have more power sailing into the wind than other types. This is why it is such a popular rig with modern sailboats. It was called a Marconi rig after the inventor Guglielmo Marconi because its system of mast stays that looked like the early wireless masts. However, the name Bermuda rig was in use two centuries earlier. It came from the late 1600s when European sailors noticed how well the small sloops in Bermuda worked.

It was developed in Bermuda in the 17th century. It was based on the leg-of-mutton sail. The strong gusty winds around the Bermuda islands made sailing around the waters difficult to navigate. The prevailing winds came out of the west which lined up with the islands. In addition, the number of reefs around the islands required caution. Most other sail designs did not address these issues.

It is widely thought the first of these designs was a fore-and-aft rig built by in the 17th century by a Dutch-born Bermudan. While his name is not remembered, he may have seen the Moorish lateen rigs that were widely used during the time Spain ruled Holland. The Dutch modified early lateen rigs turning the yards into angled masts. This design was called bezaanjacht in Dutch (in English this meant "leg of mutton"). By the 19th century the design had evolved into using tall triangular sails and jibs. They also used Bermuda cedar for the hulls which is much lighter than oak. This made the Bermuda sailboats very fast and easily maneuverable. They could travel into the wind with ease and were especially fast when heading downwind. Very soon they were being raced.

The name Marconi rig came from the 1899 America's Cup yacht race held in New York City. Guglielmo Marconi demonstrated his new wireless radio by reporting on the race. The masts of the Bermudan rigged vessels with their supporting cables looked like the wireless mast of Marconi's radio. This is how they came to be named Marconi rigs.

All content from Kiddle encyclopedia articles (including the article images and facts) can be freely used under Attribution-ShareAlike license, unless stated otherwise. Cite this article:
Bermuda rig Facts for Kids. Kiddle Encyclopedia.