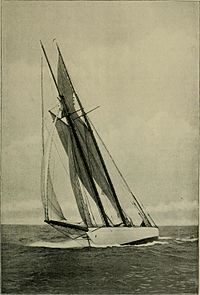 A fore-and-aft rig is a sailing rig that mainly has sails that are set along the line of the keel instead of perpendicular to it. Such sails are described as fore-and-aft rigged.

Two of the earliest fore-and-aft rigged sailing designs were the Chinese junk and the triangular lateen sails of the Egyptian Feluccas and dhows. The lateen sail was used by Greek ships as early as the 9th century. By the 11th century the fore-and-aft rig began to be used in the Italian city-states and the Mediterranean Sea. The generally gentle climate made its use practical. There seems to be no record of when it was first used in Northern Europe. The square rigged sails came first in the North. The Vikings used square rigged sails which became popular in Britain and Northern Europe. They certainly had seen its use in the course of trade and during the Crusades. The Renaissance changed this. Slowly the fore-and-aft rig came into common use on rivers and in estuaries in Britain, Northern France, and the Low Countries. The square rig remained standard for the harsher conditions of the open North Sea as well as for transatlantic sailing. The lateen sail was more maneuverable and faster, while the square rig was clumsy but seaworthy.

All content from Kiddle encyclopedia articles (including the article images and facts) can be freely used under Attribution-ShareAlike license, unless stated otherwise. Cite this article:
Fore-and-aft rig Facts for Kids. Kiddle Encyclopedia.