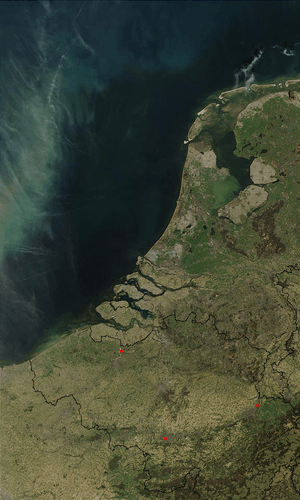 The Low Countries as seen from space

The Low Countries is a term used to refer to a geographical region, especially during the Middle Ages. This region is around the deltas of the Rhine, the Scheldt and the Meuse (Maas). Today, the Low Countries consists of the Netherlands, Belgium, Luxembourg, and the parts of Lower-Saxony (in Germany) that are in the region. Sometimes, the French Netherlands (Nord-Pas-de-Calais) are included as well.

The Dutch name of the Netherlands is Nederland, which literally means low country. The region was usually referred to as de Nederlanden.

All content from Kiddle encyclopedia articles (including the article images and facts) can be freely used under Attribution-ShareAlike license, unless stated otherwise. Cite this article:
Low Countries Facts for Kids. Kiddle Encyclopedia.