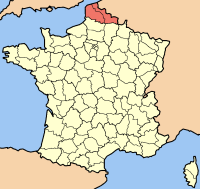 Nord-Pas-de-Calais is in red 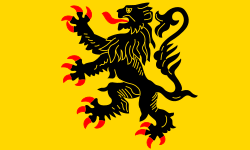 The two departments in the region were Nord and Pas-de-Calais.

The local economy was based on carbon, steel and textiles. The secondary sector (industry) employed 33.8% (of an 28.9% national average). Unemployment was at 12.9 per cent (9.8% national average). Structural investment in the TGV and the Channel Tunnel has shown some improvement though. The tourism industry does well thanks to the border with Belgium and closeness to England.

All content from Kiddle encyclopedia articles (including the article images and facts) can be freely used under Attribution-ShareAlike license, unless stated otherwise. Cite this article:
Nord-Pas-de-Calais Facts for Kids. Kiddle Encyclopedia.