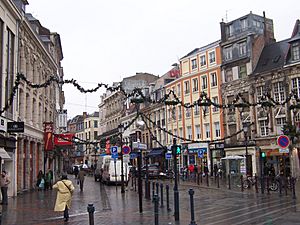 A street in Lille

Lille is a city in the north of France. Lille has about 226,800 inhabitants. It is the capital of the region Nord-Pas-de-Calais. About two million people live in the urban area (conurbation) shared with Kortrijk and Tournai.

Lille has an oceanic climate (Cfb in the Koeppen climate classification). It is on the border with Belgium. 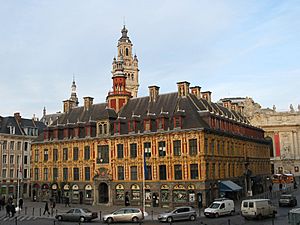 The Old Stock Exchange and the belfry of the Trade Chamber

Lille is twinned with:

All content from Kiddle encyclopedia articles (including the article images and facts) can be freely used under Attribution-ShareAlike license, unless stated otherwise. Cite this article:
Lille Facts for Kids. Kiddle Encyclopedia.