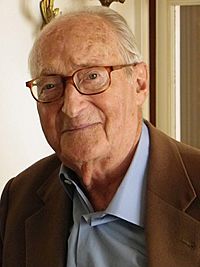 In 2005, he was, with others authors as Frédéric Beigbeder, Richard Millet and Jean-Pierre Thiollet, among the Beirut Book Fair's guests in the Beirut International Exhibition & Leisure Center, commonly BIEL.

All content from Kiddle encyclopedia articles (including the article images and facts) can be freely used under Attribution-ShareAlike license, unless stated otherwise. Cite this article:
Alain Decaux Facts for Kids. Kiddle Encyclopedia.