Haifa is situated on the Israeli Mediterranean Coastal Plain, the historic land bridge between Europe, Africa, and Asia, and the mouth of the Kishon River. Located on the northern slopes of Mount Carmel and around Haifa Bay, the city is split over three tiers. The lowest is the center of commerce and industry including the Port of Haifa. The middle level is on the slopes of Mount Carmel and consists of older residential neighborhoods, while the upper level consists of modern neighborhoods looking over the lower tiers. From here views can be had across the Western Galilee region of Israel towards Rosh HaNikra and the Lebanese border. Haifa is about 90 kilometers (55.9 mi) north of the city of Tel Aviv, and has a large number of beaches on the Mediterranean.

Panorama of Haifa from Mount Carmel

The Carmel Mountain has three main wadis: Lotem, Amik and Si’ach. For the most part these valleys are undeveloped natural corridors that run up through the city from the coast to the top of the mountain. Marked hiking paths traverse these areas and they provide habitat for wildlife such as wild boar, golden jackal, hyrax, Egyptian mongoose, owls and chameleons. 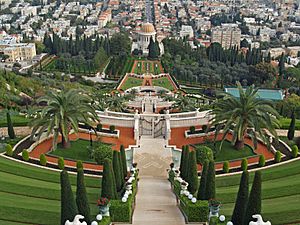 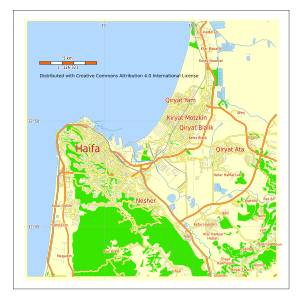 In 2005, Haifa has 13 hotels with a total of 1,462 rooms. The city has a 17 kilometres (11 mi) shoreline, of which 5 kilometres (3 mi) are beaches. Haifa's main tourist attraction is the Bahá'í World Centre, with the golden-domed Shrine of the Báb and the surrounding gardens. Between 2005 and 2006, 86,037 visited the shrine. In 2008, the Bahá'í gardens were designated a UNESCO World Heritage Site. The restored German Colony, founded by the Templers, Stella Maris and Elijah's Cave also draw many tourists. Located in the Haifa district are the Ein Hod artists' colony, where over 90 artists and craftsmen have studios and exhibitions, and the Mount Carmel national park, with caves where Neanderthal and early Homo Sapiens remains were found.

All content from Kiddle encyclopedia articles (including the article images and facts) can be freely used under Attribution-ShareAlike license, unless stated otherwise. Cite this article:
Haifa Facts for Kids. Kiddle Encyclopedia.