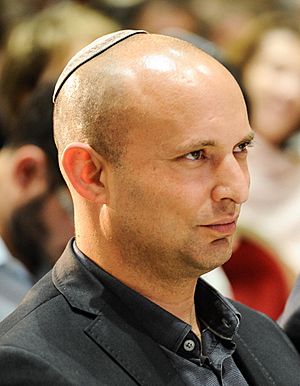 Naftali Bennett, Hebrew: נפתלי בנט , (born March 25, 1972 in Haifa) is an Israeli politician of HaBayit HaYehudi ("The Jewish Home"). He has been active in national politics since 2012.

As the Education minister he wants more content about Judaism in Israeli schools. This affects the secular public school system as well as religious public schools. Furthermore he is absolutely against the establishment of an independant Palestinian state.

He performed his military service in an IDF special forces combat unit in which he saw action in several operations. (He is a reservist with the rank of major). Afterwards he studied law at the Hebrew University of Jerusalem. Before entering into politics he worked in software, which has made him very wealthy. He was the CEO of software companies Cyota and Soluto.

Naftali is an observer of Modern Orthodox Judaism. Until his election into the Knesset he was also a citizen of the United States due to his parents being US citizens who emigrated to Israel.

All content from Kiddle encyclopedia articles (including the article images and facts) can be freely used under Attribution-ShareAlike license, unless stated otherwise. Cite this article:
Naftali Bennett Facts for Kids. Kiddle Encyclopedia.