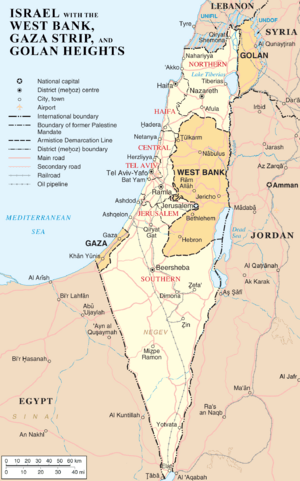 Israel and the West Bank, Gaza Strip, and Golan Heights.

The Israeli–Palestinian conflict is a battle that is still going on between the State of Israel and the Palestinians. It forms part of the wider Arab–Israeli conflict. It is a dispute between two groups of people with claims over the same area of land. Many attempts have been made to make a two-state solution, which would create an independent Palestinian state alongside Israel. At present, the vast majority of Israelis and Palestinians, according to many major polls, agree a two-state solution is the best way to end the conflict. Most Palestinians view the West Bank and Gaza Strip as constituting the area of their future state, which is a view also accepted by most Israelis. A handful of academics advocate a one-state solution, whereby all of Israel, the Gaza Strip, and West Bank would become a bi-national state with equal rights for all. However, there are significant areas of disagreement over the shape of any final agreement and also regarding the level of credibility each side sees in the other in upholding basic commitments. The conflict started in 1948.

All content from Kiddle encyclopedia articles (including the article images and facts) can be freely used under Attribution-ShareAlike license, unless stated otherwise. Cite this article:
Israeli–Palestinian conflict Facts for Kids. Kiddle Encyclopedia.