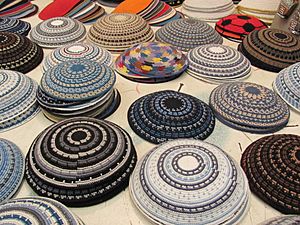 Crocheted kippot for sale in Jerusalem

A kippah; also spelled as kippa, kipa, kipah, is a brimless cap, usually made of cloth, worn by male Jews to fulfill the customary requirement held by Orthodox halachic authorities that the head be covered. It is usually worn by men in Orthodox communities at all times. Most synagogues and Jewish funeral services keep a ready supply of kippot. 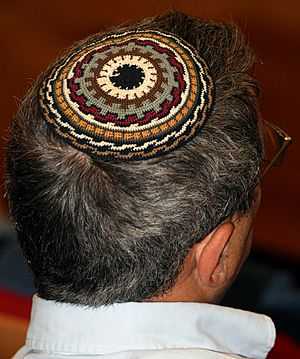 In the Middle Ages in Europe, the distinctive Jewish headgear was the Jewish hat, a full hat with a brim and a central point or stalk. Originally used by choice among Jews to distinguish themselves, it was later made compulsory in some places by Christian governments as a discriminatory measure.

In the early 19th century in the United States, rabbis often wore a scholar's cap (large saucer-shaped caps of cloth, like a beret) or a Chinese skullcap. Other Jews of this era wore black pillbox-shaped kippot. 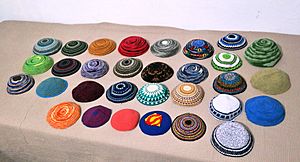 Often, the color and fabric of the kippah can be a sign of a specific religious movement, particularly in Israel. Knitted or crocheted kippot are usually worn by Religious Zionists and the Modern Orthodox, who also wear suede or leather kippot. Members of most Haredi groups wear black velvet or cloth kippot.

In the United States, however, different kippot tend not to carry such religious associations.

More recently, kippot have been observed made in the colors of sports teams, especially football. In the United States, children's kippot with cartoon characters or themes such as Star Wars are popular. 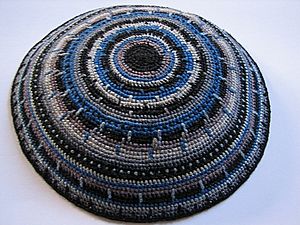 Kippot have been inscribed on the inside as a souvenir for a celebration (bar/bat mitzvah or wedding). Kippot for women are also being made and worn. A special baby kippah has two strings on each side to fasten it and is often used in a brit milah ceremony.

Samaritans once wore distinctive blue head coverings to separate them from Jews who wore white ones, but today, they more commonly wear fezes with turbans similar to that of Sephardi Jews from the Middle East and North Africa. Today, Samaritans do not usually wear head coverings, except during prayer, Sabbath, and religious festivals.

All content from Kiddle encyclopedia articles (including the article images and facts) can be freely used under Attribution-ShareAlike license, unless stated otherwise. Cite this article:
Kippah Facts for Kids. Kiddle Encyclopedia.