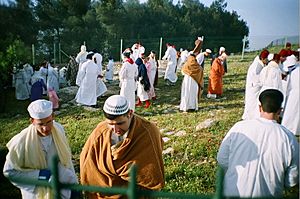 The Samaritans are a group of people who live in the Levant. Samaritans believe in the same one God of Judaism, but use only the Torah as text.

There are more than 800 Samaritans. Most of them live in Holon and Nablus.

Ancestrally, Samaritans claim descent from the tribe of Ephraim and tribe of Manasseh (two sons of Joseph) as well as from the Levites, who have links to ancient Samaria (now constituting the majority of the territory known as the West Bank) from the period of their entry into Canaan, while some Orthodox Jews suggest that it was from the beginning of the Babylonian captivity up to the Samaritan polity under the rule of Baba Rabba. Samaritans used to include descendants whose ancestry was ascribed to the Benjamin tribe, but this line became extinct in the 1960s. According to Samaritan tradition, the split between them and the Judean-led Southern Israelites began during the biblical time of the priest Eli when the Southern Israelites split off from the central Israelite tradition, as they perceive it.

In the Talmud, a central post-exilic religious text of Rabbinic Judaism, the Samaritans are called Cutheans (Hebrew: כּוּתִים, Kutim), referring to the ancient city of Kutha, geographically located in what is today Iraq. In the biblical account, however, Kuthah was one of several cities from which people were brought to Samaria, and they worshiped Nergal. Modern genetics partially support both the claims of the Samaritans and the account in the Hebrew Bible (and Talmud), suggesting that the genealogy of the Samaritans lies in some combination of these two accounts. Genetically, modern Samaritan populations are found to have "much greater affinity" genetically to Jews than to neighbouring Palestinian Arabs. This suggests that the Samaritans remained a genetically isolated population.

The Samaritans are adherents of Samaritanism, a religion closely related to Judaism. Samaritans believe that their worship, which is based on the Samaritan Pentateuch, is the true religion of the ancient Israelites from before the Babylonian captivity, preserved by those who remained in the Land of Israel, as opposed to Judaism, which they see as a related but altered and amended religion, brought back by those returning from the Babylonian Captivity. The Samaritans believe that Mount Gerizim was the original Holy Place of Israel from the time that Joshua conquered Canaan. The major issue between Jews and Samaritans has always been the location of the Chosen Place to worship God: The Temple Mount of Moriah in Jerusalem according to Judaism or Mount Gerizim according to Samaritanism.

Once a large community, the Samaritan population appears to have shrunk significantly in the wake of the bloody suppression of the Samaritan Revolts (mainly in 529 CE and 555 CE) against the Byzantine Empire. Conversion to Christianity under the Byzantines also reduced their numbers. Conversions to Islam took place as well, and by the mid–Middle Ages, Benjamin of Tudela estimated only around 1,900 Samaritans remained in Palestine and Syria.

The present-day population has been consistently divided between Qiryat Luza on Mount Gerizim and the city of Holon, just outside Tel Aviv. Most Samaritans in Holon and Qiryat Luza today speak Hebrew and Arabic. For liturgical purposes, Samaritan Hebrew, Samaritan Aramaic, and Arabic are used, all written with the Samaritan alphabet, a variant of the Paleo-Hebrew alphabet, which is distinct from the Hebrew alphabet. Hebrew and later Aramaic were languages in use by the Jewish and Samaritan inhabitants of Judea (the name by which Israel was known during part of the Second Temple era) before the Roman exile.

Samaritans have a stand-alone religious status in Israel, and there are occasional conversions from Judaism to Samaritanism and vice versa due to marriages. While the Israeli Rabbinic authorities consider Samaritanism to be a branch of Judaism, the Chief Rabbinate of Israel requires Samaritans to officially go through a formal conversion to Judaism in order to be recognized as Halakhic Jews. One example is Israeli TV personality Sofi Tsedaka, who formally converted to Rabbinic Judaism at the age of 18. Samaritans with Israeli citizenship are obligated to undertake mandatory service in the Israel Defense Forces, while those with dual Israeli-Palestinian citizenship (living in Qiryat Luza) are generally exempted.

All content from Kiddle encyclopedia articles (including the article images and facts) can be freely used under Attribution-ShareAlike license, unless stated otherwise. Cite this article:
Samaritans Facts for Kids. Kiddle Encyclopedia.