Land of Israel facts for kids 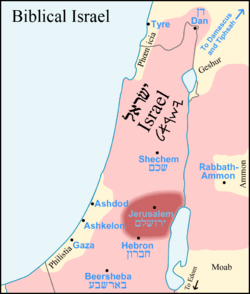 A map of the Kingdom of Israel, as described in the Bible.

The Land of Israel (Hebrew: אֶרֶץ יִשְׂרָאֵל ʼÉreṣ Yiśrāʼēl, Eretz Yisrael; Arabic: أرض إسرائيل‎code: ar is deprecated ) is a name for the region also known as Canaan, Palestine or the Holy Land. The name comes from the Torah and the Bible. The area is in the Middle East, and covers the southern part of the Levant.

Before the rise of the Kingdom of Israel, the region was called the Land of Canaan (the home of the Canaanites). In the Bible, the land was referred to as the ’Promised Land’ or the ‘Holy Land’.

All content from Kiddle encyclopedia articles (including the article images and facts) can be freely used under Attribution-ShareAlike license, unless stated otherwise. Cite this article:
Land of Israel Facts for Kids. Kiddle Encyclopedia.