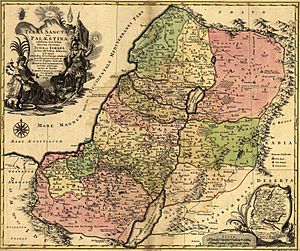 A 1759 map entitled The Holy Land showing not only the Ancient Kingdoms of Judah and Israel in which the 12 Tribes have been distinguished, but also their placement in different periods as indicated in the Holy Scriptures by Tobias Conrad Lotter

The Holy Land is an area in the Levant that is holy to Abrahamic religions (Christianity, Islam and Judaism). The name roughly refers to the region of Palestine. Jews say God gave the Holy Land to them. This is where Jesus was born, crucified and resurrected. 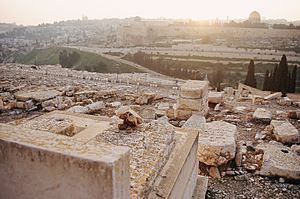 Jewish cemetery on the Mount of Olives, Jerusalem. The holiness of Israel attracted Jews to be buried in its holy soil. The sage Rabbi Anan said "To be buried in Israel is like being buried under the altar." 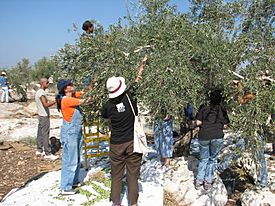 Olives trees, like this one in Qefin, have intrinsic holiness in Judaism, especially during the Sabbatical Year. This "seventh year holiness" carries with it many religious laws.

Jews do not commonly refer to the Land of Israel as "Holy Land" (Hebrew: אֶרֶץ הַקוֹדֵשׁ Eretz HaKodesh).

From the perspective of the 1906 Jewish Encyclopedia, the holiness of Israel had been concentrated since the sixteenth century, especially for burial, in the "Four Holy Cities": Jerusalem, Hebron, Safed and Tiberias - as Judaism's holiest cities. Jerusalem, as the site of the Temple, is considered especially significant. Sacred burials are still undertaken for diaspora Jews who wish to lie buried in the holy soil of Israel.

According to Jewish tradition, Jerusalem is Mount Moriah, the location of the binding of Isaac. The Hebrew Bible mentions the name "Jerusalem" 669 times, often because many mitzvot can only be performed within its environs. The name "Zion", which usually refers to Jerusalem, but sometimes the Land of Israel, appears in the Hebrew Bible 154 times.

The Talmud mentions the religious duty of colonising Israel. So significant in Judaism is the act of purchasing land in Israel, the Talmud allows for the lifting of certain religious restrictions of Sabbath observance to further its acquisition and settlement. 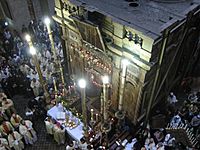 The Church of the Holy Sepulchre is one of the most important pilgrimage sites in Christianity, as it is the purported site of Christ's resurrection. 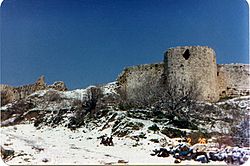 Crusader castle of Toron in the village of Tibnin, Lebanon

For Christians, the Land of Israel is considered holy because of its association with the birth, ministry, crucifixion and resurrection of Jesus, whom Christians regard as the Savior or Messiah, and because it is the land of his people, the Jews (according to the Bible). Christian books, including editions of the Bible, often had maps of the Holy Land (considered to be Galilee, Samaria, Judea).

Al-Aqsa Mosque in the Old City of Jerusalem

In the Qur'an, the term Arabic: الأرض المقدسة‎code: ar is deprecated (Al-Ard Al-Muqaddasah, English: "Holy Land") is used in a passage about Musa (Moses) proclaiming to the Children of Israel: "O my people! Enter the holy land which Allah hath assigned unto you, and turn not back ignominiously, for then will ye be overthrown, to your own ruin." (Surah 5:21) The Quran also refers to the land as being 'Blessed'.

Jerusalem (referred to as Al-Quds (Arabic: الـقُـدس‎code: ar is deprecated , "The Holy")) has particular significance in Islam.

The exact region referred to as being 'blessed' in the Qur'an, in verses like [17:1], [21:71] and [34:18], has been interpreted differently by various scholars. Abdullah Yusuf Ali likens it to a wide land-range including Syria and Lebanon, especially the cities of Tyre and Sidon; Az-Zujaj describes it as, "Damascus, Palestine, and a bit of Jordan"; Muadh ibn Jabal as, "the area between al-Arish and the Euphrates"; and Ibn Abbas as, "the land of Jericho". This overall region is referred to as "Ash-Shām" (Arabic: الـشَّـام‎code: ar is deprecated ).

Bahá'ís consider Acre and Haifa sacred as Bahá'u'lláh, the founder of the Bahá'í Faith, was exiled to the prison of Acre from 1868 and spent his life in its surroundings until his death in 1892.

In his writings he set the slope of Mount Carmel to host the Shrine of the Báb which his appointed successor `Abdu'l-Bahá erected in 1909 as a beginning of the terraced gardens there. The Head of the religion after him, Shoghi Effendi, began building other structures and the Universal House of Justice continued the work until the Bahá'í World Centre was brought to its current state as the spiritual and administrative centre of the religion. Its gardens are highly popular places to visit and Mohsen Makhmalbaf's 2012 film The Gardener featured them.

The holiest places currently for Bahá'í pilgrimage are the Shrine of Bahá'u'lláh in Acre and the Shrine of the Báb in Haifa which are UNESCO World Heritage Sites.

All content from Kiddle encyclopedia articles (including the article images and facts) can be freely used under Attribution-ShareAlike license, unless stated otherwise. Cite this article:
Holy Land Facts for Kids. Kiddle Encyclopedia.